By Jean - April 17, 2020
Selections from Specimens of the Pre-Shakespearean Drama, vol. I, ed. John M. Manly 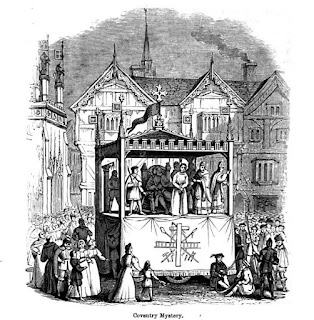 That 2020 TBR challenge that I'm not officially doing said that in March, I could take the TBR book that had been there the longest.  As far as I could figure, this was that book.  I bought it in about 1994 from the UC Berkeley Library, which had discarded it from the Moffitt Undergraduate Library (my least favorite library on campus, which is now a bunch of fancy group study rooms with no books at all).  It is a two-volume set, with a date of 1897 on it, and has a bookplate in it for one George Hubbard Savage, complete with family crest (on right!) and motto ("A te pro te").

This volume contains the fun stuff in the dual set: a whole bunch of medieval mystery plays, in which various guilds would depict a piece of the Bible;  some Robin Hood and St. George plays, and a sword play.  I wanted to read some of those, not the whole thing all in one go.

I read the "Norwich Whitsun Plays," which depicted the Creation and Fall and were given by the grocers of Norwich.  In rhyming verses (mostly couplets), Eve is created for Adam, the Serpent tempts them, and they are expelled from Paradise.  The plays are really not very long or even difficult to read, although they retain a lot of the spelling and there are lacunae where bits of the script are missing.  These plays were written in 1533 and 1565.  The mystery plays were apparently commonly performed on a wagon that was also a stage, so I found an illustration, included above.

What I was really looking forward to was the Robin Hood plays, and they were fun, but also slightly disappointing, because large chunks are missing.  There are three plays, which pit Robin Hood against a knight, a friar (Friar Tuck), and a potter.  The first play seems to be very old, dating from before 1475, and a knight promises the Sheriff to arrest Robin Hood.  Very little of the play survives, but it probably didn't have a lot of dialogue anyway!  It's easy to see that a Robin Hood play was pretty much an excuse for mayhem on a stage -- lots of fighting and yelling insults, with the occasional donning of a disguise, and of course Robin Hood always wins.

In "Robin Hood and the Friar," Robin tells John that a friar has just whacked him with a quarterstaff and robbed him, so off they go to get revenge.  Robin and Friar Tuck each have a gang of men, and they all fight.  Robin calls Tuck a "lousy friar," and Tuck shoots back with "ragged knave."  It must have been fun to watch!  The play about the potter involves Robin smashing all the potter's pots because he hasn't ever paid a penny for passage through the forest, and then lots of fighting.

The St. George plays involve a lot of mayhem too, but it seems to be slightly more organized.  This volume includes two.  The Oxfordshire play is very fun; it presents a large and random cast of characters, ranging from Old Father Christmas, to King Alfred and his Queen, to the Giant Blunderbore and several others.  Everybody runs around and fights, and a Dragon appears, so they all fight him, and the Doctor comes and cures everybody's wounds, and Father Christmas brings peace and plenty.

The Lutterworth Christmas play is also about St. George, who is a prince here, and again, there's lots of fighting with a Turkish Knight, who mortally wounds George.  A doctor comes along and cures him:


All sorts of diseases,
Whatever you pleases;
I can cure the itch, the pitch,
The phthisic, the palsy, and the gout;
And if the devil's in the man,
I can fetch him out.
My wisdom lies in my wig.

There is also quite a long play of the old folk type that involves a Fool and his sons trying to kill him, with a sword dance.  I'm not really familiar with it, so when it says that the dancers "lock their swords to make the glass," and then the Fool jumps up and down on it, I was pretty befuddled.  But Youtube to the rescue -- there are a few examples of morris dancing with swords on video, and it turns out that they do this trick where they kind of weave the swords together to make a six-pointed star wreath arrangement, which they use as a looking-glass.   So I learned quite a bit.

This post has become ridiculously long, but I was having fun with this whole thing, and I shall end with a bit of family history that I think is fun.   Congregations in my church generally put on some sort of Christmas party, and when I was about 14 or 15, they asked some families to put on little plays or shows, or songs, or whatnot, and everybody would go around the building to the various rooms and see these little performances.  My mom decided to have us kids do a St. George play, which is quite possibly the only time anybody has ever done that at an LDS Christmas party in the US.  My three brothers were St. George, the Saracen, and the Dragon, and I was the Doctor with a curing potion.  We had all completely forgotten this until a year or so ago, when a couple of photos surfaced, which are highly embarrassing, but worth saving for posterity.  I am holding our baby sister, who spent the entire time demanding to "drink medicine" too. 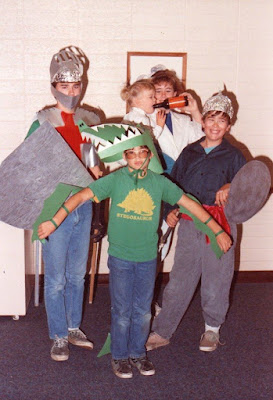 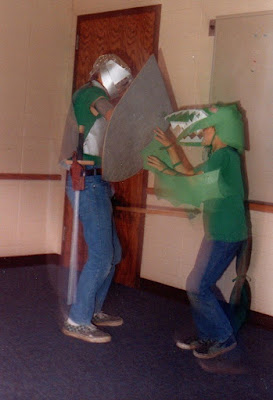