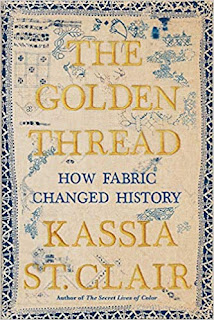 
A while ago, St. Clair's first book, The Secret Lives of Color, was very popular, but I had already read Victoria Finlay's Color: A Natural History of the Palette (which is wonderful, and apparently I read it pre-Howling Frog, which surprises me!) and I -- rather snobbily -- eschewed the newer book, thinking it couldn't be as good.  I will have to rethink that snap judgement.  I can never resist a book about textiles, and though I kind of thought this might be on the light side, I found that I enjoyed it very much and and recommend it to any textile-lover...or for that matter, anybody who has never given a thought to the huge importance of textiles.

This book is not a comprehensive history of the development of early textiles, though.  St. Clair hops around a bit in the fields of history and geography.  Each chapter focuses on one sub-topic, and gives several stories about that.  So there is no giant history of linen (that might take a very large book); there is a chapter on linen's importance in ancient Egypt, and several different stories about that.

After weaving and linen, there are chapters on silk, wool, cotton, lace, and then more modern fabrics such as rayon, textiles for extreme cold, space suits, sports, and, finally, spider silk.  Each one contains fascinating stories and details.

One of my favorite stories was about the work of Su Hui, who composed and embroidered an incredibly complex poem, Star Gauge, on a panel of silk.  It can be read in any direction and is divided into panels, as shown:

Another favorite was the revelation (to me!) that the Vikings wove their sails from wool.  I would have assumed they were linen, but no!  It was a highly specialized job involving an incredible amount of work; the wool they used was naturally high in lanolin, and then they added fish oil and other substances to make the fabric both waterproof and efficient for sailing.  It sounds like the sail may have been a good deal more valuable than the actual ship; a ship could be built in a few weeks, but sails took years.  Scandinavians used wool for sails for centuries.

And as I mentioned, there is a lot of information here about modern developments in fabrics, too.  The chapter on cold-weather gear was particularly fascinating, involving both mountain-climbing and polar exploration.  Early cold-weather gear was ridiculously difficult and inadequate, being mostly wool.   Alpinists were ...snobbish?  ignorant?  about the extreme environment, and so we get descriptions like


By 1924 Mallory had grudgingly accepted the need for gaseous aid to climb Everest.  Even today many climbers believe climbing without it is aesthetically preferable; previously Mallory had believed that it was unsporting and, worse, un-British.

[on the first man to try out down clothing, coated in balloon fabric] Finch, an Australian, was ridiculed by the snobbish Alpine Club and his contemporaries refused to adopt the style, even when it proved far warmer than their own gear.

This book was so much fun!  I loved reading it.  In fact, since last week was National Library Week, we decided to celebrate by taking 'quarantine shelfies,' and I chose to use The Golden Thread as my book. 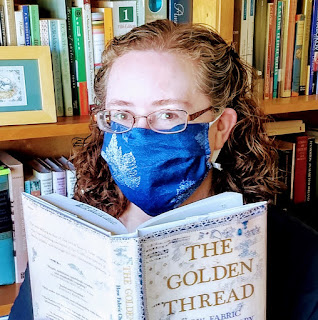