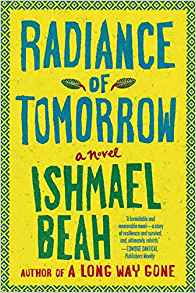 Radiance of Tomorrow, by Ishmael Beah

Well folks, I'm back!  Six weeks off has been very good for me, and we'll see where it goes from here.  My main trouble is the same as ever and is a universal: so many things to say, so little time.  And for my first post-break post, I've got a novel set in Sierra Leone.  Ishmael Beah is a well-known author now, and he started off with a memoir of being a child soldier, which I gather attracted some controversy, but I haven't read it.

The blurb on the cover calls this novel a parable, and I can see why.  It's mostly, almost entirely, a realistic novel, but the edges have been smoothed a bit so that things happen at the right time.  I noticed this mainly at the start; I think the story gets more real as it goes along.

In the countryside of Sierra Leone, people are starting to recover from the devastating civil war that slaughtered so many, and in which children were often forced to become soldiers.  The village of Imperi was empty for some time, but its inhabitants start to filter back in and bring their home back to life.  There are new residents, too -- teenagers who are trying to escape from their former lives as soldiers and build for themselves.  Two teachers, Benjamin and Bockarie, emerge as the main characters and start work at the newly reopened school.

Imperi's hopeful future, however, is threatened when a mining company starts operations nearby.  Peaceful nights are lost to drunken brawling, and there is no concern whatsoever for safety, either for residents or employees.  The river is ruined by chemical runoff, and the police and administrators are all raking in bribes, so there's no recourse at all; damages and deaths are simply ignored.   Eventually the families have to leave their ruined village and try to start new lives in the capital city of Freetown, which offers no more safety or security, but they always try to have hope in tomorrow.

These are really just shreds of hope that the characters are clinging to.  The optimistic title gives way to a very grim novel that nevertheless honors the determination of people to keep moving forward and find ways to survive.  It also notes the deep problems plaguing the characters' society, which all seem to have their roots in the endemic corruption present in all levels of power.  Beah asks how a society can progress if its people are not allowed to do honest work, gain real education, and see possibilities for a better future.

I found this story difficult to read just because the lives it portrays are so hard.  It's well worth reading, though, and it's beautifully written.
African literature read around the world