Blackout and All Clear

Instead of finishing off my official TBR challenge list, I dived into Connie Willis' gigantic and sprawling time-travel epic story of World War II, the double-volume Blackout and All Clear.  Each is a good 600 pages long, so it could easily have been a quartet! 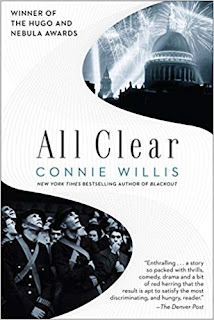 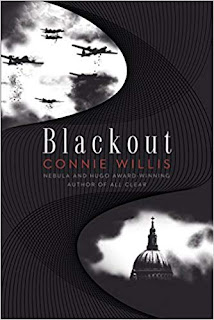 In 2060 Oxford, several historians are preparing to jump around in World War II, observing various aspects of the war.  Merope, alias Eileen, is working with evacuated children in the countryside.  Polly goes to 1940 to observe the London Blitz.  And Michael will be Mike, an American reporter in Dover who just happens to see the home end of the evacuation of Dunkirk.    Other historians have plans too, and Colin, age 17, keeps hoping to go along even though he isn't even an Oxford student yet.

Things go very pear-shaped right away for the three historians; they arrive just a bit off-target, and their drops stop working.  Eileen vastly overstays her time when the evacuees all get measles and are quarantined for weeks on end; Polly's drop is promptly covered in bomb debris; and Mike ends up at Dunkirk itself.  And there are other stories popping up: Ernest is doing intelligence work meant to mislead the Germans; somebody is at V-E Day; and a young man is running around St. Paul's.

Trapped in World War II, stranded in time, the historians worry that they've accidentally altered history.  What if the Germans win because Mike saved a soldier?  What if the timeline is collapsing and that's why they can't get home?

This story is incredibly complex (like history! like life!) and full of suspense.  You have to pay serious attention to who's who, which I didn't do well enough the first time I read this.  It's a bit of a deep dive, but it's such a wonderful story and Willis works so hard to pay homage to all the people who felt distinctly ordinary but who performed heroics daily, just by keeping on.