I've been having one of those times when books criss-cross each other, and most of it was while I was taking a break.  But I really want to talk about them, so call it a themed riffle of reviews... 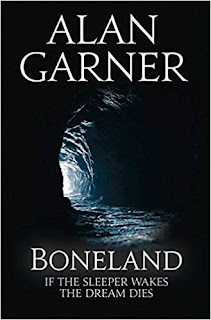 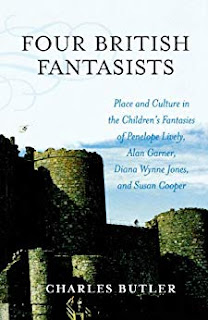 I loved Four British Fantasists so much!  Obviously it's right up my alley, seeing that DWJ and Cooper are two of my favorites.  I've never read Penelope Lively, but this book convinced me to.  If, like me, you are really into at least two of these four writers, you'll enjoy this analysis.  There were lots of wonderful insights, but the part I'll talk about here concerns Alan Garner, who does get a large share of the book because he concerns himself so much with place -- to the point of obsession.

The four authors featured had quite a bit in common, since they were all English, of approximately the same generation -- they were all children during WWII -- and they all went to Oxford, though they did not know each other.  They also tended to get accused of writing Tolkien derivatives, and Butler does a lovely job of pointing out that in fact, all four writers did very different things that were not particularly Tolkien-based.  At least two of them had not read Lord of the Rings when they wrote their own novels.  Butler quotes Garner as rather acerbically saying that when he did read LOTR to see if his books were very much like Tolkien's, what he discovered was that "the critics hadn't read Beowulf."

This book let me know that Boneland is a follow-up to Garner's two earlier books, The Weirdstone of Brisingamen and The Moon of Gomrath, so then I wanted to read it.  Butler comments on Garner's movement toward prose that becomes starker and more reliant on dialogue -- so that it's not very easy to read -- and on his preoccupation with the area of Cheshire where his family has lived for generations.  Butler says that Garner wants to make his readers work a bit to enter the particular world of this one landscape; he doesn't just want to give it away to any-old-body.  That is certainly true; he is opaque to the point of frustration.  Butler contrasts this with DWJ's attitude -- which I find far more sympathetic -- that it isn't fair to write for children and assume that they can visit a particular place.

In Boneland, which is definitely not a children's/YA novel like the first two,  Colin is now an adult, and a very troubled one.  Susan, his twin, is missing and possibly in the Pleiades.   Colin remembers nothing at all before the age of 13, and absolutely everything after that.  He's a brilliant astronomer who can't leave his home because he believes that his observation of the local landscape of Alderley Edge is what keeps it in existence.  After hearing his sister's voice, he becomes even more troubled.  His new psychiatrist tries to help him...unless she's an ancient enemy in disguise.

Colin's narrative trades off with that of the Watcher, a prehistoric guardian of a place he calls Ludcruck.  There must be someone to take care of this place to keep it in existence, but he hasn't seen anyone else for many years and he may be the last person.  Going in search of other people, he finds some...but they are not people like him.

Boneland is crammed full of references to the Alderley Edge area.  You can find many of the roads on Google Maps, but at least half of the references are to physical landmarks like particular stones or hills that are not listed in Maps, and which are not described.  This really is a book that works best if you already live in the area, which is ....not a feature I love.  It's all very well to have an intellectual discussion about sense of place, but most evidently it can be taken too far.

The Watcher's Ludcruck is what's now known as Lud's Church or Ludchurch in Staffordshire,* a crack in the stone that must be quite a sight.  It's only about 15 miles from Alderley Edge, so pretty much the same neighborhood, though Colin has never heard of it -- he's too busy doing the Watcher job for the Edge.  Lollards are thought to have worshiped there in the 15th century, thus the name.  Ludchurch is also thought by many (including Garner) to be the Green Chapel in Sir Gawain and the Green Knight:


Hit hade a hole on þe ende and on ayþer syde,
And ouergrowen with gresse in glodes aywhere,
And al watȝ holȝ inwith, nobut an olde caue,
Or a creuisse of an olde cragge… (ll. 2180-83).

It had a hole at one end and at either side,
and its walls, matted with weeds and moss,
enclosed a cavity, like a kind of old cave
or crevice in the crag --
[Armitage translation] 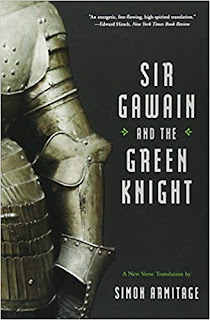 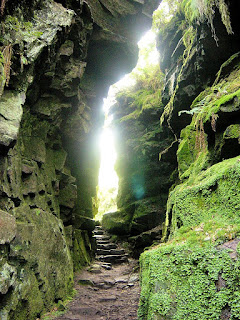 Now it so happens that I also read Simon Armitage's translation of Sir Gawain and the Green Knight a few months ago, but I never did get around to writing about it.  The edition has the original on one page, and the translation on the other, so I was trying to read the original first.  Armitage tries quite hard to retain the alliterative character of the verses, which often feels like a stretch, but I appreciate the effort to make it sound like it would have sounded to its intended audience.  It's a good addition to the Green Knight shelf of your library; I think for a poem like this, it's best to read a couple of translations so as to get a look at the work from more than one side.

This was a fun selection of books to read at approximately the same time, and I'd like to add another one or two to the mix.  All are interesting books of their own type.

*Ludchurch belongs to the town of Leek, which is quite small and probably nothing special, but it's also my maiden name.  That doesn't mean that we belong to Leek-based stock going back centuries; the family legend is that two brothers were on the run from the law for sheep-stealing, and as they passed through Leek they thought it would be a good idea to change their name.  So I'd quite like to visit someday.  In fact this set of books has given me a long list of places to visit someday!