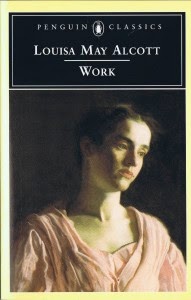 Work: a Story of Experience, by Louisa May Alcott

I was kind of lost for a Transcendentalist pick for the literary movement challenge.  I've read the most famous works and I'm not that big a fan.  (While I'm all for simplicity and self-reliance and all, I just don't like the song and dance they make about it.)  So I was looking at my bookshelf, rather hopelessly, when I noticed Louisa May Alcott's Work, a novel I never got around to reading.  It turned out to be a perfect choice, which is not to say that I enjoyed it much as a novel, but it's a perfect specimen of Transcendentalist feminism, a meditation on the very Victorian question "what can a woman do?"

(I actually own a book titled What Can a Woman Do? or, Her Position in the Business and Literary World, by one Mrs. M. L. Rayne, from 1893.  Mrs. Rayne writes about professional women in every branch of business, including law, and also gives a selection of morally uplifting poetry and prose that encourages women to achieve self-sufficiency however they can, from taking in boarders to keeping bees to becoming a doctor.  It belonged to my great-grandmother, for whom it was a pressing question at times.) 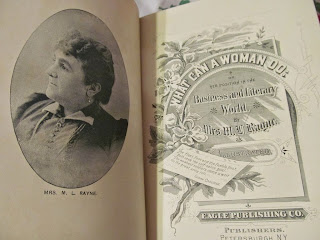 Alcott addresses her question with her heroine, Christie, a young New England woman of no special talent or education who wishes to make her own way in the world.  Christie moves through several different kinds of work--service, theater, dressmaking, and so on.  She helps people and learns much, but eventually falls into a lonely depression and illness, leading to the next phase of her life living with other women.  Christie meets a minister (surely modeled on Alcott's father) who puts her in touch with virtuous people.

The interesting bit is that Alcott clearly felt it necessary to put in a love interest--David, modeled on Henry David Thoreau--but works strenuously to make it as friendshippy as possible.  Christie and David live in the same house, as friends, for a year.  There is a break of a few months before she moves back in--now engaged--for another whole year, and still she puts off the wedding, which only occurs when David has been called up to the Civil War.  I mean, he's on his way out the door, and so is she since she has signed up to work as a nurse.  They spend the war as a married couple happily living apart, until David dies while heroically saving some women escaping slavery.  Only then does Christie go home to have a baby and live in her proper sphere--a community of women who live and work together in harmony, achieving both public good and domestic happiness on a farm and florist business.

The function of the plot is to get Christie into this, her ideal place.  Meanwhile, the tone of the story is exactly like Little Women, only addressed to adults (and thus more forthcoming about the evils of slavery, and the inclusion of a fallen woman in the plot), and with about 50% more preachiness.  We often think of Little Women as preachy, but LMA really lets herself go here, and we get full blasts of her ideas about social justice and how to live.  Even if you agree with all of it (and much of it is just fine), it's exhausting.  This is a full-on Transcendentalist and feminist tract, featuring the major personalities of the movement--and I suspect that the farm they end up on is a depiction of how Fruitlands was supposed to be going to work.

To finish, here is a description of Mr. Powers, the minister who inspires Christie:


Mr. Power's heart was truly an orphan asylum, and every lonely creature found a welcome there. He could rebuke sin sternly, yet comfort and uplift the sinner with fatherly compassion; righteous wrath would flash from his eyes at injustice, and contempt sharpen his voice as he denounced hypocrisy: yet the eyes that lightened would dim with pity for a woman's wrong, a child's small sorrow; and the voice that thundered would whisper consolation like a mother, or give counsel with a wisdom books cannot teach.
He was a Moses in his day and generation, born to lead his people out of the bondage of dead superstitions, and go before them through a Red Sea of persecution into the larger liberty and love all souls hunger for, and many are just beginning to find as they come doubting, yet desiring, into the goodly land such pioneers as he have planted in the wilderness.
He was like a tonic to weak natures and wavering wills; and Christie felt a general revival going on within herself as her knowledge, honor, and affection for him grew. His strength seemed to uphold her; his integrity to rebuke all unworthiness in her own life; and the magic of his generous, genial spirit to make the hard places smooth, the bitter things sweet, and the world seem a happier, honester place than she had ever thought it since her father died.