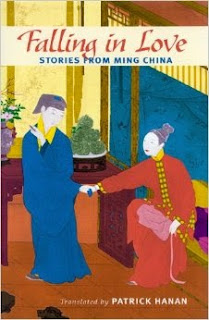 Chinese society during the Ming era was highly restrictive when it came to marriage.  Girls were kept secluded, away from possible temptation, and marriages were arranged between families.  Naturally therefore, romantic stories were hugely popular (much like Bollywood movies in India, but more so!).  In most of these stories, the characters fall in love by seeing each other--after all, there was no chance that anyone would be talking and getting to know one another.  They then find some kind of strategem for meeting and quickly get to the physical stuff; there is no time for lots of dialogue or anything like that.

The seven stories in this collection show a wide variety of plots and moral approaches to the material.  The writers' sympathies are with the lovers, but only some really approve of the action.  Others enjoy the story but warn readers that this kind of stuff can only end in tragedy.  Some of the stories have happy endings and others...really don't.  One story kills off everyone in a massive bloodbath!  Another describes two male students who have an affair.

My favorite story was a long, elaborate melodrama in which a poor man wins the love of a sophisticated and wealthy courtesan, because he is kind and thoughtful--such a rare trait that the story says it's guaranteed good stuff, better than looks or money.


I'm putting this on my Classics Club list as a substitute for an antique Chinese novel that I can't get without spending a lot of money.  These stories are about 100 years older, but both are about romance.
Asian literature classics Translation Challenge