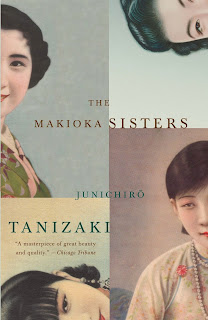 The Makioka Sisters, by Junichiro Tanizaki

The Classics Spin wouldn't help me out, so I finally got around to reading it on my own.  The back copy says that The Makioka Sisters "is arguably the greatest Japanese novel of the twentieth century," so wow!  I did in fact really enjoy it.

This is a long and deceptively quiet novel.  We have four sisters of a once-prominent Osaka family:

Tsuruko, the oldest, married with several children, she and her husband are the head branch of the family
Sachiko, also married, usually hosts her younger sisters and is the most active in their future plans,
Yukiko, elegant and quiet, "a real old-fashioned Osaka lady," but getting worryingly old for marriage arrangements,
Taeko, lively, modern, and independent, she has her plans already laid out.

In years past, the family has been too picky about marriage proposals for Yukiko and now they are not so frequent.  Getting Yukiko married to a good man is the spine of the story, but meanwhile life goes on, and it's often quite exciting; there's a flood and a typhoon, dance performances, and Taeko's career.  All this soap-opera stuff happens, but the style of writing is always quieter than an American would expect. Even the flood, which nearly kills one sister, is narrated in an understated way, at a volume of 6 instead of 11.

The portrait of Japan just before World War II is pretty wonderful to read.  The lives of the Japanese upper class are given in great detail.  Everything is done so slowly and deliberately!  No one makes a decision without at least a few days to think it over, preferably weeks.  It takes days to decide to write a letter and hours to actually do it.  Everything is roundabout, subtle, quiet.  The men have work to do (mostly in banks) and the ladies study culture.  They have international friends, and every once in a while they travel (here, Tokyo is practically a foreign country and a visit is a big undertaking).  Traditional visits to natural beauty spots are important events--cherry-blossom viewing, or firefly chasing, or seeing Mt. Fuji--they are nearly rituals to be done in the proper manner and enjoyed to the full.

We start in about 1938, and at this point the war is in the background.  You know perfectly well that Japan has invaded China and Korea, but the only evidence in these lives is an occasional mention of "the current crisis" or, later, the Great Spiritual Crisis.  The novel ends in early 1941, so by then there is more about German victories in a European war.  Still, all the characters seem totally unprepared for the war that is about to change everything they know, and a reader has to wonder how, and if, they will survive.

Oddly, the novel just cuts off at the end.  Story lines are left dangling and it just ends abruptly.  I don't get that.

Altogether a very worthwhile novel.  I enjoyed it very much.


Hey, there's a movie!  From 1983.  I'd quite like to see it, though I think a movie would be awfully short.  You could produce a whole TV series from this book.