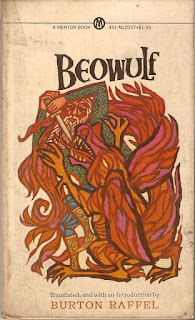 This last section of the poem skims over 50 years of Beowulf's rule as a good and righteous king to tell the story of his last days.  An escaped slave wandered into a barrow and woke up the dragon sleeping there (I really like this bit actually, as it explains that the barrow is a very ancient one built by a people now long gone.  The dragon found the treasure inside and has been guarding it for 300 years.), and now the dragon is terrorizing the Geats and looking for his lost gold cup.  Only Beowulf can face the dragon!

So King Beowulf--who is at least 70--puts on his trusty armor and vows not to leave the barrow until he has killed the monster inside.  Only one of his thanes is brave enough to follow him in and assist--his young kinsman Wiglaf.  Beowulf battles the dragon, and Wiglaf gets in a thrust that weakens the monster enough that Beowulf can deliver a killing blow.  Dying from blood loss and dragon venom, he asks Wiglaf to go deeper into the cave and bring out some of the treasure that is the partial cause of his death.  After that we mourn a lot; Wiglaf berates the cowardly thanes and there is a magnificent funeral.  Beowulf gets a barrow of his own, but this is the end of good times for the Geats; now that their brave king is dead, there is no successor and they're going to be subject to invasion and conquest. 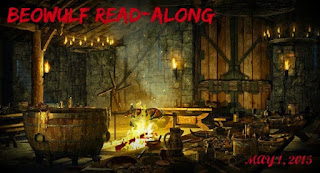 I do not understand why Wiglaf can't be the Geatish king; he certainly seems qualified.

I never noticed in prior readings that Beowulf, like most other heroic stories, assumes that the past was better.  Ancient swords are stronger than new ones (it's a bad shock when Beowulf's heirloom sword actually breaks in the dragon's head), ancient gold is better treasure, and ancient people were stronger somehow.

I really like the description of the barrow where the dragon lives.  It's clearly one of those longish hills with a stone entrance, something like the image below, except with a little stream of water coming out.  The water is poisoned by the dragon's venom. 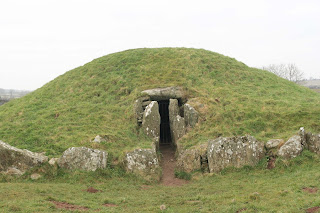 This last part of the poem is very melancholy in that Anglo-Saxon/Viking fashion.  Life is short; do your best to win glory while it lasts, but even heroes will die, and nobody is safe.  The Beowulf poet's Christianity does not change the tragic tone of the story, which celebrates the good things of life (mostly mead and heroism) while mourning their transience.

And so Beowulf is all done.  To follow up, I'm going to move on to the Song of the Volsungs to see about Sigurd and Fitela.  I don't know much about them.  I got this neat new Penguin edition that is part of a series labeled "Legends from the Ancient North (works that inspired Tolkien)" and has really cool cover art.  Beowulf, Sir Gawain and the Green Knight, the Elder Edda, and a couple others are included.

Thanks to Cleo for doing such a great job hosting the readalong!  I hope you all checked out her posts; she put a lot of effort into them.
classics English literature poetry Readalongs Translation Challenge