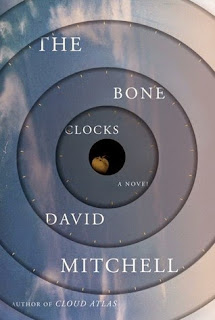 The Bone Clocks, by David Mitchell

The cover and plot blurb grabbed me and so I read Mitchell's latest.  I've never read any of his books before, so this was new territory.  I got really into the first part, but that did not last.

Holly runs off after a fight with her mother, intent on declaring her independence.  It's 1984 and she's 15, and she lets slip some odd details about her childhood; she used to have Radio People talking in her head and a lady who would visit her.  After that, we spend time in various people's heads at intervals of about 12 years--they cross paths with Holly (and others) every so often.  A sociopathic rich kid Cambridge student is intrigued with Holly until another offer comes along; a war correspondent worries that he can't give up the job; an aging bad-boy writer is losing his hold on fame.  All of these people have some slight contact with ...guardians of time?  Predators who can slip between dimensions?  and Holly might have something to do with it.

We don't get really into the SF part of the novel until after halfway through, at which point it becomes awesome.  War between the Horologists and the Anchorites, hidden societies of immortals!  Well, sort of immortals.

I liked Holly's story very much and was very annoyed when the point of view shifted away from her.  I loved the SF part.  I really disliked being in the heads of two of the other characters, and another was not very engaging.  On the whole, I think about half of this novel was worth reading, and the other half tended to spend too much time on writing/padding/unnecessary stuff/delivery of irrelevant political opinion.  (Mitchell even hangs a lampshade on this self-indulgence during the aging-writer chapter, but that doesn't really help.)  The final chapter felt like a very long, rather dull denouement in which nothing much happened and why are we still here?  It's even post-apocalyptic but it still managed to be boring--although to be fair, post-apocalyptic life probably would be boring-- and it felt preachy and tacked-on.  Meh.

Final verdict, it was half worth reading but I'm kind of disappointed.  The parts that were good were great.  Other parts felt like a slog.


Mitchell is English and much of the novel takes place there, but it's all over the country.  However, Holly spends a good deal of her running-off time in Essex, so I'm going to count that because it was one of the parts I liked best anyway.
English literature modern fiction