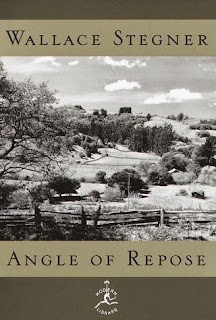 Angle of Repose, by Wallace Stegner

I should have had this novel on my TBR list, because I've been meaning to read it for years.  I've had it checked out of the library for months.  Then I thought I would just return it without reading it, but maybe I'd see how the first few pages were...and then I needed to read the whole thing.  Fair warning, though, it's really long.  My edition is over 600 very dense pages, which doesn't sound like that much, but it was.

Lyman Ward, historian and old guy, is living on his own in the house where he grew up--his grandparents' house--and he's working on chronicling his grandmother's life.  She was a prominent Western writer and artist in the late 19th century.  Most of the novel is Susan Ward's story, told from her point of view--except that it's really Lyman doing the writing and he frequently breaks the narrative to put in his opinions and tell his own story.  His version of Susan's life is influenced by his own experiences, and eventually he gives up trying to write Susan's life; he is unable to explain what happened.

There are a lot of themes here, but the one I focused on was the story of the marriage.  I have a lot of thoughts about that.  Susan is a cultured Eastern woman, and she marries a mining engineer, somehow thinking that after a few years they'll return East.  Oliver Ward is a good, honest, loyal man and an excellent engineer, but he's terrible at protecting himself from sharps.  They are both stubborn and apt to be too proud.  We never hear Oliver's point of view; only Susan's, and Susan is hugely invested in her self-image as a cultivated Eastern lady.  She's really kind of a snob, though a lovely one.  Her best friend is even more so, and Susan is constantly looking at her husband and her life with what she imagines to be her friend's perspective--and then she feels embarrassed.  This slight disloyalty ends up being the little rift in the lute, so to speak.  But on the other hand, I really felt like Susan got a lot of blame and Oliver maybe could have done better too.  Stegner doesn't make him perfect or anything, but...hrm.

I enjoyed, for once, the Western setting of the novel.  The Wards move around a lot, but the novel begins and ends in Grass Valley, just up the road from me.  My step-great-grandfather was a mining engineer and my great-grandmother spent a lot of time in mining camps, just like Susan did.

But.  The last two hundred pages of Angle of Repose are unremittingly tragic and heart-breaking.  There is no happy ending.  It stuck with me longer than a happy ending would, but I also felt sandbagged.  So be warned.  Now I need a happier story.
American literature modern fiction