Heorot celebrates, but too soon, as Grendel's mother shows up to take her revenge.  Beowulf has bunked down elsewhere, so he doesn't learn about it until the next day, but he goes straight off to take care of things.  Grendel's mother lives under a deep lake, behind a waterfall, and her cave is filled with treasures taken from her victims.  Beowulf's borrowed sword (from Unferth) breaks, but he grabs a seriously gigantic sword from the wall and swops off her head and Grendel's too, whereupon their poisonous blood melts the sword like it was ice-cream.  Everyone has given Beowulf up for dead, but he shows up with a head or so for a trophy, and everyone celebrates again.  Beowulf goes home to his king and relates his adventures, which impress everyone; oddly, no one seems to have thought much of him before.

I've been trying to figure out what Grendel and his mother are supposed to look like.  They are pretty humanoid in shape--observers could tell that they were male and female from far away--but they're huge.  At one point, it's implied that a person could be stuffed into Grendel's bag.  And he has scary giant spikes for fingernails.

I've been reading the Tolkien prose and a poetic translation as well.  While Tolkien's notes are hugely helpful, I'm honestly finding the poetry easier to follow!  I suppose Tolkien's interest in getting the exact sense of every word makes for a difficult text if you're not an 11th century Anglo-Saxon.  (I also looked around a bit to find out just where the Beowulf poet would have lived.  The poem is written in the West Saxon dialect of Old English, which puts him in Wessex, possibly even in the court at Winchester). 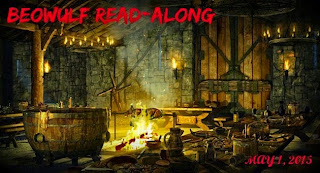 Just as Beowulf is about to tell his story, he goes off on a tangent about Hrothgar's daughter.  Beowulf prophesies about her marriage and a battle that will result.  Tolkien explains that this would have been well-known history/legend to the audience, and that Beowulf's understanding of politics and human nature may have been proofs of his ability to lead.

Tolkien is talking about Heorot like it was a real place, which I hadn't really thought about much.  I'd assumed it was more legendary than real, but I poked around a bit and evidently Heorot was indeed a real place.  The Skjöldung clan lived at Lejre, not too far from Roskilde on the island of Sealand in Denmark.  (I've been to Roskilde; the former arch-cathedral of the Danish church is located there, there's a big music festival, and it has a lot of history).  The remnants of old halls have been found at Lejre, dating back to the days of Beowulf.  Heorot, that wonderful mead-hall, would have looked a lot like this (reconstruction).  It must have felt cozy and safe once it was filled with carousing warriors.