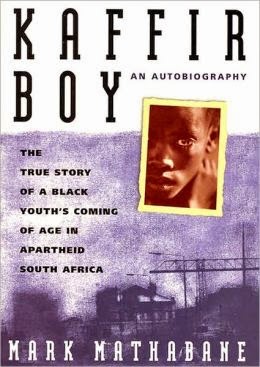 Kaffir Boy: The True Story of a Black Youth's Coming of Age in Apartheid South Africa, by Mark Mathabane

I first ran into this book when I started doing Banned Books Week at work, so when the Classics Club got started I put it on the list.  I've actually had it sitting around for some time now, waiting to be read, but it's difficult to find many books that describe more awful brutality and misery than this memoir of life in a black ghetto under apartheid, so it was kind of hard to get started.

It's also an amazing description of a kind of life that is almost never documented by the people who live it, because they are nearly all too poor, illiterate, and desperate for survival to sit around writing about their lives.  It's important to read, but also really difficult to stomach.

Johannes/Mark Mathabane grew up in one of the worst black ghettos in South Africa, and yet everyone there was desperate to stay.  The government actually wanted all the inhabitants to go and live in "tribal lands" (allotted deserts with almost no means of survival) or, if they had passes to work, in single-sex barracks.  In the ghetto, families lived together, albeit while starving in filthy conditions.  The paperwork required of blacks for employment or school was deliberately impossibly labyrinthine and Kafka-esque.

Johannes was lucky to have a mother who was determined to get her children educated.  She surmounted the obstacles to his schooling and made him attend.  He was also lucky that his grandmother worked for an English lady who didn't agree with apartheid and passed on books and clothing to him.  In pretty well every other way, getting an education was an incredible struggle.  They were always hungry, always in danger from police and criminals, and always subject to their father's drunken threats.  Nevertheless, Johannes stuck to his schooling, and found another potential way out of the ghetto--tennis.

Tennis seemed to me an unlikely means of escape, but Mathabane describes it as the way for him to get out of South Africa.  Enough education could get him a good job in South Africa, but only sports could get him out.  This was the age of Arthur Ashe, who inspired him to play ambitiously.  He started playing on black courts, but the facilities were awful.  Somehow he started visiting a tennis ranch where he met Germans and other foreign whites who were interested in befriending and coaching him so he could play competitively.  Years of interminable work and struggle later, mixed with anti-apartheid protesting, danger, and personal study, it finally paid off.

Really impressive book, really hard to read because of the level of misery involved.