If on a winter's night a traveler 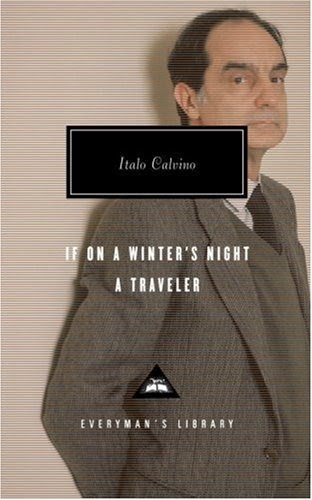 If on a winter's night a traveler, by Italo Calvino

Suddenly I'm turning into someone who really likes surrealist post-moderny literature.  How did that happen?

If on a winter's night a traveler is one of the famous landmark postmodern novels.  Start reading it and you find that you're reading about yourself reading If on a winter's night a traveler.  First 'you' settle in to read, and then you get the first chapter of the story, but it breaks off; your book is misprinted.  Back to the bookstore you go in search of a sound copy, where you meet Ludmilla, another reader.  And every time you think you've found a whole copy of a book, it turns out to be the first chapter of a different and completely unrelated novel.  Chapters of your quest to find a whole book alternate with these first chapters, so that the entire reading experience turns into an exercise in frustrated desire (for stories, and, progressively more obviously, for women).

There are some fantastic characters here.  Ludmilla, Calvino's ideal reader, who is constantly coming up with new descriptions of what she wants out of books.  She is mysterious and closed-off, yet allows random strangers in at odd moments.  Her sister, Lotaria (chance?), an annoying grad student who can no longer read for pleasure but only for analysis--finally, she descends to using a computer to read her books.  Ermes Marana, a translator of novels and secret master of a world-wide conspiracy to forge literature!  (How Crying of Lot 49.)  He's like a literary version of his Greek god namesake.


I loved how Calvino put some of his fictional novels into semi-fictional languages.  At one point, 'you' find a novel written in Cimmerian and search out a professor of Cimmerian,* and that leads you to a professor of Cimbrian and a Cimbrian author.  In the story, these languages are related and part of a people who set up an independent republic after World War II (in Europe, presumably somewhere eastern).  In reality, Cimmerians were an ancient tribe north of the Black Sea, squished by the Scythians, and Cimbrian is a German language similar to Bavarian (too dissimilar to be a dialect, apparently, and spoken in very northern Italy).

Later on, we get even further afield.  'You' become embroiled in an international book-censorship scheme between the South American countries of  Ircania and Ataguitania.  Ircania (Hyrcania in English) was once a Persian satrapy.  Ataguitania does actually seem to be a fictional name.

*Speaking of Cimmerian, the professor is named Uzzi-Tuzii.  He's Calvino's jab at stuffy, persnickety professors who devote their lives to one narrow subject--"a dead department of a dead literature in a dead language"--but here's an odd thought I had.  Does anyone else wonder if Uzzi-Tuzii's initials of U-T are a reference to the Biblical Urim and Thummim?  I have probably read too much John Bellairs, but the Urim and Thummim are associated with revelation and divination, right?  The name is supposed to have meant something like lights and perfections, or revelation and truth.  Uzzi-Tuzii is--heck, large sections of the entire book are--just the opposite of that, but in theory a literature professor should be interested in truth.

Or maybe Calvino just liked the goofy sound of the name.

And then at the end, the titles of all those novels you've been trying to read this whole time join up into a first sentence of their own.  (I did notice this quite soon, but I was thinking of it as a poem.)  All along, there is a preoccupation with beginnings, to the point that a novelist character writes:


I would like to be able to write a book that is only an incipit, that maintains for its whole duration the potentiality of the beginning, the expectation still not focused on an object.  But how could such a book be constructed?  Would it break off after the first paragraph?  Would the preliminaries be prolonged indefinitely?  Would it set the beginning of one tale inside another, as in the Arabian Nights?

And there are some wonderful bits about censorship and repression of literature.  Just endless amounts of fun here.


A very neat novel.  I had a great time reading it and will have to re-visit it someday.
classics Euro Challenge modern fiction