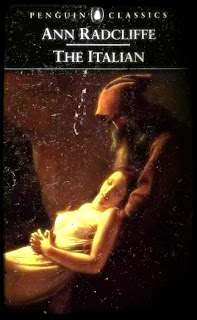 We're almost done, and information is being revealed!

Wait, I'd better start at the beginning of our section for this week. Ahem.

This week's reading started off by checking on Ellena and her situation at the new convent.  This convent is run by a very different kind of abbess than the old evil convent.  In fact, this abbess is Radcliffe's Ideal Woman--and her ideal woman is not actually a Catholic, so it gets a little awkward towards the end of the first paragraph:


This lady was a shining example to governesses of religious houses, and a striking instance of the influence, which a virtuous mind may acquire over others, as well as of the extensive good that it may thus diffuse. She was dignified without haughtiness, religious without bigotry, and mild, though decisive and firm. She possessed penetration to discover what was just, resolution to adhere to it, and temper to practise it with gentleness and grace; so that even correction from her, assumed the winning air of courtesy: the person, whom she admonished, wept in sorrow for the offence, instead of being secretly irritated by the reproof, and loved her as a mother, rather than feared her as a judge. Whatever might be her failings, they were effectually concealed by the general benevolence of her heart, and the harmony of her mind; a harmony, not the effect of torpid feelings, but the accomplishment of correct and vigilant judgment. Her religion was neither gloomy, nor bigotted; it was the sentiment of a grateful heart offering itself up to a Deity, who delights in the happiness of his creatures; and she conformed to the customs of the Roman church, without supposing a faith in all of them to be necessary to salvation. This opinion, however, she was obliged to conceal, lest her very virtue should draw upon her the punishment of a crime, from some fierce ecclesiastics, who contradicted in their practice the very essential principles, which the christianity they professed would have taught them.

In her lectures to the nuns she seldom touched upon points of faith, but explained and enforced the moral duties, particularly such as were most practicable in the society to which she belonged; such as tended to soften and harmonize the affections, to impart that repose of mind, which persuades to the practice of sisterly kindness, universal charity, and the most pure and elevated devotion. When she spoke of religion, it appeared so interesting, so beautiful, that her attentive auditors revered and loved it as a friend, a refiner of the heart, a sublime consoler; and experienced somewhat of the meek and holy ardour, which may belong to angelic natures.


Sorry that's kind of long, but I thought it was worth quoting.  What do you think of that?  I was pretty stunned to find that the best kind of abbess is a secretly-kind-of-Protestant abbess.

Next interesting thing: the mysterious monk!  Who is this guy?  He is not Schedoni, Vivaldi finally figures out.  Sometimes he's like a ghost, walking around unseen.  Other times he's a monk of the Inquisition and the head Inquisitor knows who he is.  Very strange.  Although he is Schedoni's enemy and wants to bring him to justice, the Mystery Monk is not a good guy and I'm not quite sure yet what to make of him.

And then there's Olivia, who manages to turn up at the ideal abbess' convent just in time to reveal herself as being exactly who we figured she would be.  And she reveals more important information about Schedoni, too!

Finally we have some news about the Marchesa, too, who has unexpectedly died and left a parting wish that Vivaldi and Ellena be allowed to marry.  The Marchese has finally figured out where his son is, and so perhaps he will soon be rescued.

But we still have just a few chapters to go in order to solve the rest of the story and make everything clear.  Have fun finishing!

I couldn't resist the temptation and I've already finished the book! I needed to know the truth about Schedoni, Ellena and what happened at the Confessionary of the Black Penitents. Still, I don't want to spoil the reading for anyone so I'll say no more!

Hey, good for you! Sounds like you enjoyed it?