The Castle of Otranto

The Castle of Otranto, by Horace Walpole

In order to kick this month off right, we have to start with the grandaddy of Gothic novels, The Castle of Otranto.  I love this book in the same way that I love movies that feature Tor Johnson--Walpole is completely serious about writing a new kind of story, but it's so unintentionally funny.  I think someone should make a movie; it would be great.

The setting is early medieval Italy.  We open at a wedding at the Castle Otranto; the young prince of the house--

--wait, I have to say something about names now.  The young Italian prince is named Conrad.  His sister is Matilda.  His father is Manfred.  Apparently there are a lot of Germans in medieval Italy.  OK, back to our story--

Conrad is about to marry Isabella, a young ward of the family (how 18th century!).  But as the groom walks to the chapel, he is suddenly squashed by a giant helmet that falls from the sky.

Yes, you read that correctly.

This giant helmet is a portent of doom upon the entire family.  Manfred, the lord of Otranto, is cursed because of the sins of his ancestors.  That's OK with me, because Manfred is a horrible person.  He didn't think much of his son anyway, so he hatches a new plan; he'll put his wife away and marry Isabella himself, in order to get more sons.  Manfred's lady is the virtuous Hippolita, and she is your Patient Griselda type.  So is Matilda.  If I was Hippolita, I'd go along with this plan just to get away from Manfred and live in peace, but that seems a bit hard on Isabella, who is the only one with any gumption around here. 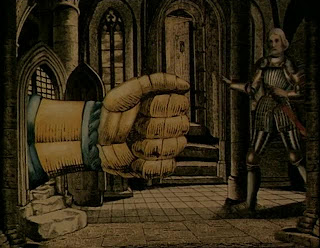 Isabella runs away, aided by a nice young peasant who just happens to be around all the time.  More gigantic knightly accessories show up.  Lots of mayhem ensues, with suitable mistaken identities, swooning, shrieking, accidental stabbings, and secret princes.  You'll never guess who the secret prince is.


Walpole really was starting off a whole new kind of novel.  In the 18th century, a literary battle of sorts was waged between the old-fashioned romances (long, rambly things--think Don Quixote, only not funny) and the new realistic novel.  By 1764, realism had been in for quite some time, and romance was pretty dead.  The idea of having a ghastly and horrid novel that was not one bit realistic went against all literary fashion, and while reviewers thought it was just awful, readers ate it up and asked for more.

Many Gothic novel conventions got their start right here in Otranto, so in a way it's like reading Tolkien (or watching Dilwale Dulhania Le Jayenge, heh).  The elements are very familiar and you have to remember that this is the book that invented a lot of them.  The story of Manfred's downfall is presented as a true historical incident, the account of which was discovered hidden in an old house--and this actually fooled quite a few people, because of its novelty.  The prevalence of priests (ideally harboring important secrets), and Italy, and crumbling castles with secret passages--all that sort of thing started with Walpole.

Walpole loved castles so much that he built one for himself--Strawberry Hill was an extravaganza production that inspired the setting for The Castle of Otranto.  You can go visit it!  It's close to London and even closer to Heathrow Airport, and if you get a chance to see it, please report back here.

I am totally delighted that Walpole built himself a castle. And why not! The people want a castle!