The History of the Caliph Vathek 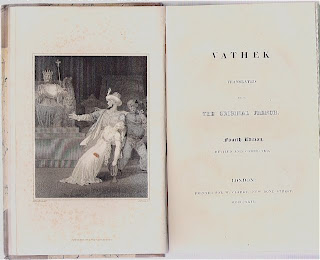 The History of the Caliph Vathek, by William Beckford

Beckford wrote Vathek in French in 1782, at a time when there were two fashionable crazes: the Gothic and the Oriental.  Beckford married the two genres in a tale of an Arabian king gone wrong.  His story was published in English under the claim that it was a story directly from the Arabic.  The name Vathek sounds kind of German to me, but the name and the story are very very loosely based on a real person, the Abbasid caliph Al-Wathiq ibn Mutasim, who ruled in the 9th century.

Vathek is about 150 pages long, and has no chapters; it just goes from episode to episode without a break.  (Much, I suppose, as Beckford wrote it--he claimed it only took him a few days and nights.)  There isn't much in the way of character development.

The story is that Vathek is a powerful caliph with a bad temper (his angry glance can kill people!) and a large thirst for knowledge.  A demon, Giaour, shows up and offers him knowledge and power if he will renounce Islam and worship him instead.  Vathek happily does this; he commits blasphemy, sacrifices children to Giaour, and generally makes everyone miserable.  His mother is expert in black magic and helps him out.

Vathek however has a very short attention span and keeps breaking his demonic contract, especially when he meets a girl.  They recommit to Giaour together and travel to Hell to meet Eblis (another name for the devil, I think).  For a short time they enjoy luxury and unlimited power, but within a few days it's all over and they fall into eternal torment.

I will admit to sort of skimming this story, which isn't all that great.  You needn't bother unless you're really into the genre.  A funny thing about my ebook copy--it's a direct scan of the original book, and for some reason the Vathek story is bundled with Johnson's Rasselas.  Why?  I do not know.