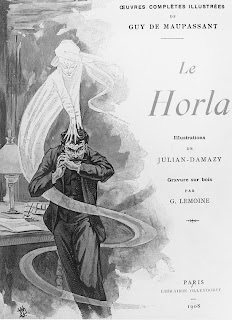 "The Horla," by Guy de Maupassant

I've never read de Maupassant before.  Gothic October is opening up all sorts of new doors for me!  Since "The Horla" is only the first story in a whole book of stories that I downloaded, I'll need to read the other ones too.  One is simply titled "Mad!"  I have GOT to read that one soon.

The story is written as a series of journal entries and we never learn the narrator's name.  He's feeling pretty good one day as he watches the ships sail up the river, but after that he gets gradually more and more disturbed, especially at night.  He's convinced he must be sleepwalking, or perhaps going mad.  A trip away restores his health, but once home, he gets worse again, and eventually realizes that some entity is trying to take him over...

It's a very spooky and tension-filled tale, a classic of the genre.  It has inspired imitations and homages--movies, Star Trek episodes, and most famously, Lovecraft's "Call of Cthulhu" story.  I had never heard of it before, and was surprised to see how very influential it has been.  So, if you've never read it before, it will well repay the short amount of time it takes to read it.
Posted by Jean at 10:39 PM

It sounds like a good October read! I've read Pierre et Jean, and quite enjoyed it, but not Horla, so I think I'll have to download this one and check it out sometime when I'm feeling like a bit of spook.