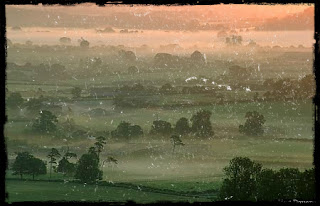 "Wailing Well" is another story set at Eton, and it's longer and more substantial than yesterday's story.  It also has quite a bit of detail about Eton life.  It's set in Dorset, on a camping trip, which is exactly where a group of boys were camping when MRJ read out the story to them.  The record states that "several boys had a somewhat disturbed night as the scene of the story was quite close to Camp"--which I take to mean that the story scared the dickens out of some of the boys!  As well it would; it's a creepy one.

This story has some great humor as well, very suited to boys and masters.  I liked this comment:


It was Wilcox again, whom the Provost noticed as he passed through the playing fields, and, pausing for a moment, observed to the Vice-Provost, “That lad has a remarkable brow!” “Indeed, yes,” said the Vice-Provost. “It denotes either genius or water on the brain.”

Remember that MRJ was the Provost, and he and the Vice-Provost were not very friendly.  I think, though, that the comments from the Provost in this story poke a little fun at MRJ himself.  The Vice-Provost seems to come off as more witty (and grumpy, but as we know I like grumps).

The story concerns one Stanley Jenkins, who is something of a trouble-maker.  He plays pranks all the time, several quite malicious, and then there's this bit:


But it was in the life-saving competition that Stanley Judkins’s conduct was most blameable and had the most far-reaching effects. The practice, as you know, was to throw a selected lower boy, of suitable dimensions, fully dressed, with his hands and feet tied together, into the deepest part of Cuckoo Weir, and to time the Scout whose turn it was to rescue him. On every occasion when he was entered for this competition Stanley Judkins was seized, at the critical moment, with a severe fit of cramp, which caused him to roll on the ground and utter alarming cries. This naturally distracted the attention of those present from the boy in the water, and had it not been for the presence of Arthur Wilcox the death-roll would have been a heavy one. As it was, the Lower Master found it necessary to take a firm line and say that the competition must be discontinued. It was in vain that Mr. Beasley Robinson represented to him that in five competitions only four lower boys had actually succumbed. The Lower Master said that he would be the last to interfere in any way with the work of the Scouts; but that three of these boys had been valued members of his choir, and both he and Dr. Ley felt that the inconvenience caused by the losses outweighed the advantages of the competitions. Besides, the correspondence with the parents of these boys had become annoying, and even distressing: they were no longer satisfied with the printed form which he was in the habit of sending out, and more than one of them had actually visited Eton and taken up much of his valuable time with complaints. So the life-saving competition is now a thing of the past.

So four boys have drowned in this competition, and you can see how very upset everyone is!

Anyway, Jenkins goes too far when he ignores all the warnings and determines to visit the Wailing Well.  I thought the description of his trip to the well, and all that happens to him, was pretty good; there's some good tension and scariness going on there, don't you think?

But "one of the first to recover his spirits was Judkins minor."  Judkins major is unmourned and unmissed.

We only have two days left to go, and tomorrow we'll do "The Malice of Inanimate Objects."  The final story will be "The Fenstanton Witch."  Other bits and bobs count as extra credit. :)  But by all means do read all the stories!
Posted by Jean at 10:30 PM