Two Simak Titles: Goblin Reservation and The Trouble With Tycho

I enjoy Clifford Simak and found two titles to read this month: 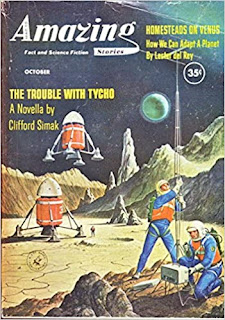 The Trouble With Tycho is a very short novel, originally published in Amazing Stories in 1960.  It was then put into an Ace Double, which I sadly do not have.  Mine is a reprint from '81.

Chris Jackson is a prospector on the moon, searching for valuable minerals, metals, and the rare, delicate lichen that can actually cure mental illnesses.  He runs into Amelia, an illegal prospector planning to make a run into Tycho, which is a super-bad idea.  The first couple of moon missions landed in Crater Tycho, and died there.  Subsequent missions to find out what happened disappeared too.  Nobody gets out of Tycho alive, but Amelia insists that her brother (now hospitalized) found a way, and together she and Chris can figure out the mystery and cash in on the massive amount of equipment they can salvage.

It's a pretty good adventure story, with an exciting finish, but you'll have to read it.  What IS there in Tycho?? 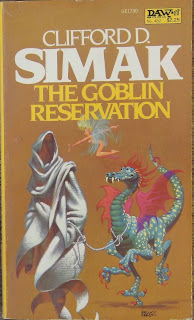 The Goblin Reservation (1968) is set hundreds of years in the future, after humanity has joined galactic society, and Earth has become home to universities that host multitudes of aliens and humans.  (I felt like this might be a follow-up to Way Station, just 500 years in that future.)  Time travel is possible, but unprofitable, and so it's an underfunded academic department.  Professor Peter Maxwell works with supernatural beings (another new discovery), and when he takes a trip off-world, he is somehow re-routed to an unknown planet, where he is given an important mission by incomprehensible beings.  Upon his return, he's told that he came back from his very normal trip a month ago and was then killed in an accident.  Now Maxwell is caught up in a chaotic mess; nobody at the college wants to listen to him about this planet full of amazing knowledge and they would really have preferred him to stay dead and not cause any trouble.  Maxwell, his two best friends Ghost (a ghost) and Alley Oop (a Neanderthal brought forward in time), the Time department gal Carol and her saber-tooth tiger Sylvester all run in circles to solve the crisis.

Lots of confusion and interest, plenty of aliens.  And mystery paintings.  And beings from before the universe began...!