Learning From the Germans 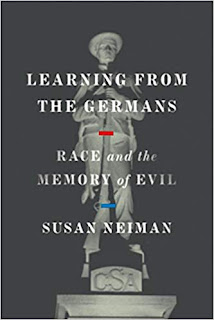 Learning From the Germans: Race and the Memory of Evil, by Susan Neiman

It's actually been a while since I read this -- it was a long, slow read and very worthwhile, and I finished somewhere in the start of January.  So probably this post will be shorter and less deep than I would like!

Susan Neiman has been studying German history and culture for a long time, and she got to thinking about German efforts to face up to the past.  How have those efforts worked, and what can we learn from them?  Are there lessons we can apply in the US?

Neiman offers in-depth analysis of various programs in Germany, which is fascinating.  Just after WWII, occupying forces put up posters of the concentration camps with captions saying "this is your fault."  Unsurprisingly, that did not make German people feel very repentant.  In fact a lot of people felt that they were the true victims -- after all, look how much they lost!  It took time and perspective for people to start to realize that the past couldn't just be ignored.

Neiman asserts that East Germany spent a lot of energy on anti-fascism work from the start, while in the West people quickly pivoted to a Cold War stance, worrying about communism and kind of ignoring the many former Nazis who continued in their posts.  After reunification, facing the past took on new urgency for the grandchilden of those who had been in the war.

We then take a look at American programs of facing the past.  The place where Emmett Till was murdered features largely; it's all still right there and wasn't that long ago.  Also a double museum in Mississippi that sounds amazing, and other things. This was all gripping material too.

A couple of quotations:

[asked what other countries can learn from Germany] "You can learn that no country, no culture, no religion is immune to falling into the abyss into which we fell.  And once it begins, there will always be people who shut down their consciences and side with the strongman.  Knowing that, we need to develop a kind of preventative uncertainty..."

"We try to emphasize that our way isn't the only way, but our way is to uphold the sanctity of people's stories.  When you're listened to, no matter what your identity is, you feel valued, and you're more open to engage in conversations that get deeper and deeper."

This was a valuable and fascinating book, with lots to think about.  Recommended!