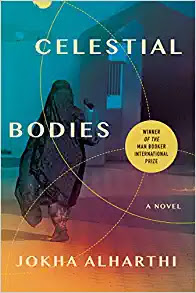 This novel has racked up the firsts.  Jokha Alharthi is the first Omani woman to have a novel translated
into English, where it then won the Man Booker International Prize for 2019.  It's the first book translated from the Arabic to win that prize.  So, quite a book!

This is a generational family novel, all taking place in one tiny Omani village.  And while my experience with multi-generational family sagas is pretty minimal, I think this one is a little different from the norm.  It bounces back and forth in time in a truly disconcerting manner; there are many short chapters focusing on various family members.  The thread that runs through it is a stream-of-consciousness narrative from Abdallah, the son, husband, and father who otherwise barely makes an appearance.  Yet he is a linchpin for the whole thing, right in the middle generation, a connection between families, and more openly emotionally raw than anyone else, especially his enigmatic wife Mayya.  And Abdallah -- whose mother died after his birth, whose stern father left him mostly to Zarifa, a woman enslaved to the family -- has a mystery attached to him too.  Why did his mother die?

We get glimpses of so many stories.  Salima, who is the backbone of the family, mother to the three sisters; Mayya, who (outrageously) insists on naming her baby daughter London; Asma, married to an artist; Khawla, who stubbornly waits for years for a cousin who went to Canada and disappeared.  Zarifa and her line.  Sulayman, Salima's husband, whose only real interest is his Bedouin mistress.  London, who grows up headstrong but needing to find direction. Marwan the Pure.  And others.

It's fascinating, but also I've never been great at family sagas.  I was very grateful for the family tree chart at the front of the book!  It was often difficult for me to keep everybody straight -- which may well have been on purpose.  I did enjoy the novel and became particularly invested in Khawla.