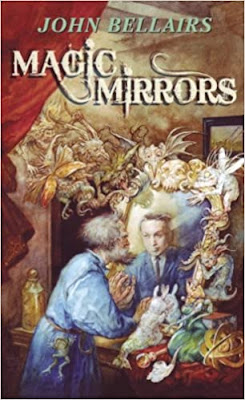 Hey everybody!  I've been happily goofing off instead of blogging, and now I have a real pile.  Every day I tell myself I need to do some blogging, and every day I decide to do it tomorrow.  I really was going to dive in today, and then I found out that today is John Bellairs' birthday.   He would have been 84 today.  (He died in 1991, at the tragically young age of 53.)  I guess it's no coincidence that yesterday evening I had the impulse to read The House With the Clock in its Walls for the 100th time!   So obviously I need to use today to post about the Bellairs book I put into my TBR challenge for this year...

Magic Mirrors is a collection of Bellairs' works for adults, a couple of which aren't easy to find these days, and one incomplete manuscript that had never been published.  I was thrilled when I discovered that this book even exists; while I own and have read two of the pieces, the others were pretty unobtainable.  So, here we have:

The Face in the Frost: an early novel for adults.  I've read this several times, but it's complicated and gets scarier every time I do read it.  This is the story of two friends and magicians, Prospero ("and not the one you're thinking of, either") and Roger Bacon, and their journey to find and defeat Melichus, an evil wizard who is building his power.  The story is full of Bellairs' trademark love of all things oddball and silly, and it's also really quite frightening.  Read it alone at night if you don't believe me.

Bellairs started a sequel to that novel, called The Dolphin Cross.  He seems to have lost confidence and steam, and eventually sent the unfinished manuscript to a young Ellen Kushner, who loved it, but no more was forthcoming.  She found it in a drawer many years later, and here it is....Prospero notices that there is some political trouble brewing.  In a country that is incredibly fragmented, with a ceremonial elected king, the new guy seems to be planning a lot of violence, and there's some very strange magic being used.  Prospero figures he ought to look into it, but before he can start, he's kidnapped and deposited on an island prison.  Once he escapes, he keeps running into more dangers and...it cuts off, which is too bad because I would love to read a complete story!

St. Fidgeta & Other Parodies:  If you've ever read Bellairs, you know that he must have been raised Catholic, and various bits and bobs of Catholic prayers and other lore often make an appearance in his stories.  This is a collection of parodies poking friendly fun at old-school Catholicism, starting with the life story of St. Fidgeta (patron of wiggly and nervous children).  There's an advertising executive's plan for capitalizing on the next time the Pope visits the US, a wild description of a fictional cathedral, and many other short pieces -- a remarkable amount, actually.  I thought they were very funny, and a  Catholic would probably be more entertained, because I'm fairly ignorant.

The Pedant and the Shuffly is an incredibly silly piece of nonsense in a story, and quite funny.  Snodrog the Pedant lives in a forest, and gets his fun by arguing logic with passers-by until he convinces them that they don't exist, at which point they transform into Flimsies -- flying, gravy-stained napkins which Snodrog uses as servants.  When Sir Bertram comes riding through, he gets some assistance by finding a Shuffly, which is a large, hairy creature impervious to logic.  The ensuing duel is violent and weird.  Can Snodrog be defeated and the Flimsies delivered from captivity?

I'm so happy to have kicked my year off right by completing my Bellairs reading.  I enjoyed it so much and it was nice to finish off those pieces I'd heard of but never gotten hold of before.  I recommend The Face in the Frost to anyone; the others are probably more for Bellairs nerds like me.  Happy birthday, John, I hope you're having a good day wherever you are.