A Writer at War 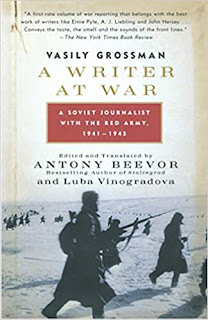 A Writer at War: A Soviet Journalist With the Red Army, 1941 - 1945, by Vasily Grossman, edited by Antony Beevor and Luba Vinogradova

Wow, this book packs a whole lot into what looks like a medium paperback.  It took me much longer to read than I thought it would!

Over a year ago, I read a biography of the writer and journalist Vasily Grossman, and this was next on the list of his works that I want to read.   Grossman was attached to the Red Army as a journalist throughout World War II, and he always wanted to be on the front lines.  He was present for the early days of the invasion, the Battle of Moscow, most of the Battle of Stalingrad, the Battle of Kursk, and for much of the Soviet advance through Germany and Berlin.

This book collects Grossman's notes taken down in real time; it does not reprint the articles he wrote for the Krasnaya Zvezda (Red Star) newspaper.  The editors give context to the notes, telling us what's going on and who everybody is.  The notes make up about 75 - 80% of the book, I suppose.  They are descriptions of the action, personal stories about the people Grossman meets, and interviews with officers.  We also see him constantly worrying about his mother; she lived in Bialystok, which was ravaged by the invading Germans.  Grossman was pretty sure his mother had been killed in the mass murder of the city's large Jewish population, but he couldn't find out for certain for over three years.  The Soviet government did not like to document Jewish deaths separately as a special phenomenon, and they simply didn't let the news of Bialystok get very far.

Grossman's articles were popular and highly regarded, because he always put in a lot of personal stories and touches.  He also admired the front-line soldiers greatly and praised their courage and self-sacrifice.  In fact, he was rather too idealistic about the front-line men; during the push through Germany, he's clearly trying to blame the following soldiers for the horrific crimes perpetrated on German girls and women, and eventually he figures it out.

One final article, Grossman's most famous, is reprinted in full; it's a detailed description of the death camp of Treblinka and how it worked.  It's an amazing article, and something that everyone should read on its own.

After the war, Grossman's career was difficult; he was both too honest and too Jewish for Stalin and Khrushchev.  He was never arrested, but he could barely get published, and his magnum opus was confiscated entirely.  It survived because of an extra manuscript he'd given a friend, which languished in a dacha for years before being found and sent to the West for publishing.

This was an excellent book to read; although its mostly notes, it gives immediate and vivid impressions of some of the most important events in the Soviet theater.