Our Exploits at West Poley 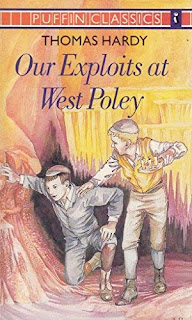 Our Exploits at West Poley, by Thomas Hardy

Did you know that Thomas Hardy wrote one single children's story?  It's quite exciting!  It's written like an account of a real event of his childhood.  It was written in 1883, and set in Somerset.

Leonard, age 13, arrives at his aunt's farm for a holiday visit (although it's in early autumn, so I don't know why he's not in school).  His cousin Stephen is a couple of years older, and very willing to show off the caves in the Mendip hills nearby; the local boys like to get into a small one named Nick's Pocket, and Steve has found a way to get further in.  They're going to be explorers!

The caves are wonderfully explorable; the boys have a grand time and find a cave formation they want a closer look at.  It's on the other side of a little stream, which they could easily cross, but it's more fun to divert the stream with a few stones and shovelfuls of sand, and let the water go down a chasm.  When they exit the cave, they find that the village's river has suddenly vanished, putting the miller and many others into despair.  They depend upon that river!  The boys are shocked to find that their game has had such drastic results, and they hurry back to re-divert the stream.

It's not that easy, though.  Leonard and Steve find themselves in a serious dilemma, with two sets of bewildered and angry villagers, rival boys, and a miserable miller's apprentice all wanting different things, and the situation turns dangerous.

This short children's novel was a fun read -- very exciting, and completely believable.  I really liked it.

Obviously I've been a bit distracted with Christmas prep -- in fact, I haven't read nearly as much as I'd like -- but I'll be posting more in the next week, what with all the 2022 prep and the Narniathon!  I hope you all have a lovely holiday and rest.