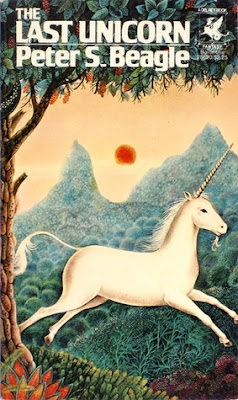 I've had a vague intention to read The Last Unicorn for many years.  The main thing that stopped me was that any time I see the words 'last' and 'unicorn' together, the theme song from the movie starts playing in my head and doesn't stop for days.  So in order to read the book, I had to mentally prepare myself for hearing that song for at least a week.  It's a very nice song, but it's not that nice!

In the end, I even went and dug up other songs from the movie, which I have not seen in many years, but which I must have watched a whole lot as a kid, since it's evidently buried deep within my brain.   I remembered the songs, the voices, and much more.  I should really watch the whole thing, because now I'm curious about how various book events were translated (or not) to film.

OK, so: a unicorn has lived in her forest for centuries, until she hears a hunter say that all the unicorns were driven away by the Red Bull long ago.  Does this mean she is the last?  She embarks upon a journey to find her lost companions.  On the way she picks up Schmendrick the Magician, who is not very good at magic, and Molly Grue, who has been cook to a band of outlaws.  As they enter King Haggard's ruined country, the Red Bull senses she is near.  If she stays a unicorn, she'll be driven into the sea, and if she changes, she will be mortal....

When Beagle published this story in 1968, it was something of an instant classic.  I don't know that it was the first fantasy novel to play with tropes in the way that it does, but it was certainly a leader in the genre.  I think that much of what it does is now familiar to readers and no longer strikes us as original and fresh in the way that it must have done back then, but it's still an excellent tale well-told.  Beagle is good at what he does.

He is especially big on similes that spark imagery and mood more than they actually make sense.  Wicked characters laugh "with a sound like snakes hurrying through mud" and the Red Bull has "horns as pale as scars."

There is also some nice humor in the story.  One of my favorite scenes is when the forest outlaw comes back to the forest -- the leader wants to be Robin Hood and just isn't -- and they're challenged for the password.  The password is so long and complex that the outlaw can't remember it, but they changed it while he was gone anyway.  Now it's really short and easy; you just imitate a giraffe.  And in order to foil cunning enemies, you must do two short and one long.

It's high time I got around to The Last Unicorn, and I'm glad I finally did.  It really is a great story.

And if you've never seen the movie, here's the video for the theme song, by America.