Jessie Redmon Fauset (1882 – 1961) was a prominent writer, editor, educator, and poet in African-American letters.  She edited the NAACP's magazine, The Crisis, from 1919 - 1926, and mentored many eminent writers, including Langston Hughes.  She then taught French and published four novels, Plum Bun being the second, and usually wrote about discrimination, passing, and feminism.  She wanted to portray African-Americans in a realistic and positive manner, celebrating Black culture and family.  While she was celebrated in her day, she was quickly forgotten as literary fashion moved on,  and she remained obscure for several decades until feminists revived her writing in the early 80s.  She's now recognized as an important part of the Harlem Renaissance.

The subtitle of this novel is -- intriguingly -- A Novel Without A Moral.  The title itself is based on a nursery rhyme, and I don't think I've ever heard this particular verse:

To market, to market
To buy a plum bun,
Home again, home again,
Market is done.

The four parts of the novel are called after each line.

Angela and Virginia are sisters in Philadelphia, part of a loving and happy family.  Father is a dark-skinned Black man, and Mother is very light, fair enough to 'pass' if she likes.  She sometimes does, in order to go shopping or attend a performance with ease, but she doesn't actually care about it or the white world.  Angela, who looks just like her mother (while Virginia is in the middle), does care.  She cares a lot.  Angela wants everything that life can offer, particularly beautiful, luxurious surroundings and the wealth that makes such things easy -- for white people.  As soon as she gets the chance, she moves to New York City, enrolls in art classes, and avoids all mention of race. 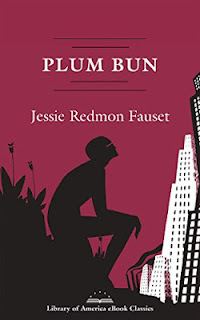 Angela meets a wide variety of people, makes friends, and starts seeing a very wealthy young man.  Roger is in love with her, but his father has very strict ideas about him only marrying into a blue-blooded New York family, and while Roger believes Angela to simply be a respectable middle-class white girl, he has no idea of marrying her.  He thinks setting her up as his mistress is a great plan, though.

But remember, Fauset said that this story has no moral.  This isn't a novel about the question of whether Angela should, or should not, hold out for marriage.  Whatever she decides to do (I'm not telling), there are several years left in the story and very different questions to answer.  Angela, who never wanted to repudiate her race, has found it necessary to cut her own sister and engage in myriad small, unseen betrayals in order to keep up her fiction.  The cost of passing is higher -- in terms of her own integrity and happiness -- than she had counted on.  What would it feel like to simply tell the truth and stop worrying about what people think?

Angela is always falling into a dilemma, which the other lighter-skinned characters share.  The white people they meet assume they're white too and treat them accordingly.  When, at some point, their status as 'colored' becomes clear -- often because they've declared it themselves -- they're accused of being deceitful, of concealing their true state.   As if they're supposed to walk around with a sign or something, or announce themselves upon entering the room.  Fauset uses it to highlight the essential stupidity and absurdity of race laws; no white people saw anything different about Angela until they were told to.

I really like this novel, its slightly unusual take, and the questions it asks.  Highly recommended.