Chris at Calmgrove is hosting a leisurely tour of Narnia, starting this month.  Chris writes: 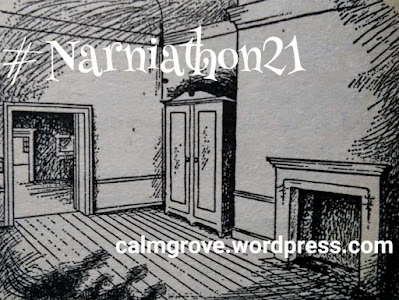 ...we’ll be reading all seven titles of The Chronicles of Narnia in publication order, beginning with The Lion, the Witch, and the Wardrobe (1950). You will have a month to read each title at your own speed, in your own time, until the last Friday of the corresponding month when you’ll be invited to comment. Here’s the schedule:

At the end of the month you’ll be invited to join a conversation here — and also on Twitter — about that month’s instalment. If you find yourself at a loss as to where to begin, I’ll pose three general questions which you can either respond to or ignore, as you wish—this readalong is designed to be an enjoyable experience, not an examination! (But in the meantime feel free to add initial thoughts below.)

I've read the Narnia books quite a few times before, so this will be a fun revisit.  For those interested in a deep dive, you might enjoy the Wade Center's podcast, which back in the spring and summer did a series discussing the Narnia books.  (The Wade Center is based at Wheaton College in Illinois and focuses on seven authors, Lewis and Tolkien being two of them.)  And I also enjoyed the book Planet Narnia, by Michael Ward, which looks for the underlying theme of the books -- underlying, that is, the more obvious Christianity of the stories.

Want to join me?