Alberic the Wise, and The Peasant Girl's Dream 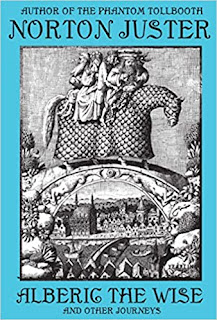 Alberic the Wise and Other Journeys, by Norton Juster

Norton Juster is most famous for The Phantom Tollbooth, which I read a lot as a kid, but I don't think I ever read anything else by him, so when I saw this little volume of three fairy tales, I put it on my TBR shelf.  They're for a middle-grade audience, but anybody else could enjoy them too.  I did.

"Alberic the Wise" is about a young farmer who hears of the wide world and goes to learn about it.  He learns many trades, but never quite becomes a master, and, now an old man, arrives in a town and starts telling stories about his journeyings.  He is acclaimed as a wise man, but soon realizes that he isn't wise at all, so what to do now?

"She Cries No More" is a fascinating little story about Claude, who (like Pierre) doesn't care.  But he becomes fascinated with a little painting in the museum, and then he actually enters it and meets the sad young lady in the picture...

I have a secret fondness for George MacDonald's romance novels.  This one was part of a series reissued in the mid-80s, with matching titles, and kind of re-written to make it comprehensible to the American teens and adults it was marketed to -- because MacDonald's Scottish novels are all written in a heavy-duty Scots accent.  Here, for example, is a piece of dialogue from early in the story, first in the edited version, and then in the 1893 original:


"What for are ye scoffin' at me?" retorted the boy, rising and looking down on her in displeasure.  "A body canna let his thoughts go but ye're doon upon them like birds upon corn!"
"I wouldna be scoffin' at ye, Francie, but that I care too muckle about ye to let ye think I hold the same opinion o' ye that he hae o' yersel'," answered the girl, who went on with her knitting.

'Ye do naething ither!' retorted the boy, rising, and looking down on her in displeasure. 'What for are ye aye girdin at me? A body canna lat his thouchts gang, but ye're doon upo them, like doos upo corn!'
'I wadna be girdin at ye, Francie, but that I care ower muckle aboot ye to lat ye think I haud the same opingon o' ye 'at ye hae o' yersel,' answered the girl, who went on with her knitting as she spoke.

So you can see why the publisher felt it necessary to do some translating so that 15-year-olds in Iowa would want to read it in 1988!

Kirsty is the protagonist, a poor peasant girl who spends most of her time keeping an eye on her older brother, who has some sort of mental disability.  He cannot bear to be indoors very much, so Kirsty takes her book or her knitting along and they spend their time on the hills.  The laird's son, Francis, is rather spoiled and is always looking for fame without work.  The story spans a good ten years, and yet manages to involve an incredibly small number of people, because Kirsty lives in such an isolated spot.  There are other people, though, and the story is fun to read and not very sentimental.  Indeed, Kirsty is a no-nonsense kind of a girl!   I had fun reading this nice story with a bit of a romance to it.
children's literature religion romance TBR challenge