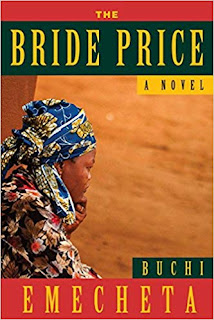 The Bride Price, by Buchi Emecheta

Happy Halloween, folks, and happy Spin Day too!  I was very excited about this title, since I love Emecheta's writing.  I found out that she considered it her best novel, but it also had tragedy attached to it; she based the story loosely on her own life, but when her husband found and read the manuscript, he was angered that his fictional counterpart was a descendant of slaves.  He burned the manuscript, which was the only copy.  Emecheta re-wrote her novel, but changed the ending from hopeful to tragic, reflecting her changed feelings and her failing marriage.

Aku-nna is a young teen when her doting father dies, leaving her and her mother and brother almost destitute.  The little family travels back to Ma Blackie's home village (Ma Blackie is much admired for her beautiful, extremely dark skin).  Ma Blackie becomes a plural wife to Okonkwo, a relative of her husband's, and Aku-nna and Nna-nndo go to school.  Aku-nna and her teacher, Chike, fall in love and vow to marry.

Chike's family is well-to-do in the village because of their educational status, but no one has forgotten that he is the grandson of a slave.  When British missionary schools were first established in the area, people sent their slaves to the schools, which were not considered useful -- but that enabled those slaves to rise in the world.  Thus Chike's ambiguous status; he's a teacher, but no respectable family would want to ally itself with him.  Chike's father can afford to offer a good bride price for Aku-nna, but will Okonkwo accept it?

Aku-nna has several suitors, and one of them, who she dislikes, kidnaps her to force her into marriage.  Aku-nna at first plans to kill herself rather than live with him, but then cleverly evades him and runs away with Chike.  They marry and live in newlywed bliss in another town...but Okonkwo has refused the bride price, and Aku-nna worries all the time about her people's belief that a bride whose price is not paid is doomed to die in childbirth.

This is a wonderful novel.  It's the third Emecheta I've read (the others are The Slave Girl and The Joys of Motherhood), and I plan to read at least one more.  I can maybe see why this one was her favorite.
African literature CC Spin