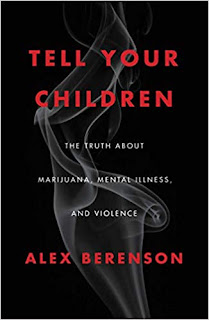 Tell Your Children: The Truth About Marijuana, Mental Illness, and Violence, by Alex Berenson

This was a very, very surprising book on all counts.  Even the author was surprised!  I was too.

Alex Berenson, journalist, was -- like a lot of Americans -- vaguely pro-legalization of marijuana.  He'd done it himself a few times, no big deal, and had the usual ideas: that pot is safer than alcohol, it's silly to get worked up about it, people don't die from pot.  His wife is a psychiatrist who specializes in criminality and mental illness, and one day when they were talking about a case, she casually mentioned that 'of course,' the perpetrator was high and had used pot his whole life.

"Of course"?
Yeah, they all smoke marijuana; the studies show a link between pot and violence.
--Wait, what?

So Berenson the journalist took a hint from Berenson the psychiatrist and decided to look at the statistics and the studies.  What he found completely surprised him, because the evidence -- he tells you where the information comes from, though some of the numbers were run for him by a sociologist doing meta-studies -- shows that pot use can come with all sorts of problems that we just haven't paid much attention to.

As we all already know, modern pot is a very different animal than the stuff people smoked 30 - 40 years ago.  It's much, much higher in THC.  And it turns out that THC isn't really very good for us, and in large amounts can trigger violent outbursts, paranoia, or psychosis.  It even seems to serve as a possible trigger for schizophrenia; heavy pot users develop schizophrenia at a higher rate.  Societies that dealt with heavy pot smokers knew this in the past, too; Berenson cites cases in India and Mexico to show that it was a known risk.

I hadn't heard about this at all; I've just heard of cannabinoid hyperemesis and other problems.  Berenson does cover other risks of heavy pot use like that.  His research is global; he uses the Dunedin study, trends in the UK, Australian studies, and so on.  There is not, in fact, a lot of US research to depend on.


I hope this information becomes better-known in the US.  I live in Northern California, pot central, and pot is a cure-all and a religion to some folks.  (It is a very boring religion.)  Pot is pretty much legal here -- we now export to the East Coast! -- and it's cheap, but it still drives a lot of crime.  I'm not a fan, and I'd be happy to see more factual information out there and less fluffy feel-good nonsense about pot being good for glaucoma and cancer.