Such a Strange Lady 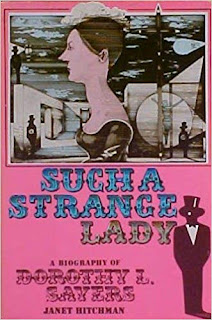 Such a Strange Lady: a Biography of Dorothy L. Sayers, by Janet Hitchman

Fun fact: Dorothy Sayers really, really hated it when people left out the L.  Pretty much everybody leaves out the L.

This was the first biography of Sayers to be published, sixteen years after her death, in 1975, and it was unauthorized.  It's an absorbing and witty biography, not too long or heavy, and it covers all the salient points.  I think a modern biography would make much of Sayers' friendships with the Inklings, while Hitchman almost completely ignores them, which is kind of refreshing.  It's an enjoyable read and I recommend it to Sayers fans.

It's got the title because so many people Hitchman spoke with started off with "She was such a strange lady..." and indeed Dorothy Sayers was an odd duck, which makes her all the more interesting to read about.  There is quite a bit about her youth, which was of course fairly miserable; tall and awkward, extremely clever but not very imaginative, loud, and prone to passions, she did not fit in well.  Hitchman describes her as "the last of the jolly women." 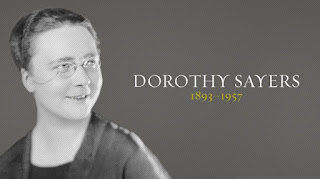 Sayers wrote largely from her own experience; she worked, for example, in an advertising office for years.  When she had a problem, she tended to write it out to get rid of it.

The biography covers all the periods of Sayers' writing, from mysteries to religious radio plays to her final all-consuming Dante project.  We also meet her husband, and her son a little bit.  This biography was the first time her son's birth was made public knowledge, in fact.  But mostly the book focuses on her writing, which I liked.

Bits I thought were fun:


[At Oxford] She was...the Bicycle Secretary, probably because no one else would take on this onerous chore.  Bicycles were, and probably still are, both a blessing and a bane to colleges.  Students will leave them about, to the hazard of townsfolk and aging dons, then complain wildly that they have been stolen.  Previous Bicycle Secretaries at Somerville had yelled themselves hoarse trying to get the owners of the machines to park them in the places provided, not on the tennis courts, in the kitchen doorway, or in the corridors.  In her term of office Dorothy changed all that; she impounded the errant bicycles and released them only on payment of a fine to the Red Cross.  Her title was changed from Bicycle Secretary to Bicycle Tyrant and the freeways of Somerville were really free.

She was a mass of contradictions.  Her public manner was always formidable, but this camouflaged a deep shyness.  She talked incessantly, mostly about her craft, and managed, while continually burbling, never to give away a single thing about herself.  It was years, for instance, before people who considered themselves her closest friends knew where she lived, or that she was married.

[On working with Agatha Christie]  She found all the contributors friendly, only Miss Christie was a bit awkward because "she disappears and won't argue."  These two ladies both suffered from shyness -- in Dorothy it took the form of extroversion, in Agatha Christie just the opposite.  Anyone who has worked with her is well acquainted with her habit of withdrawing from anything that threatens to be a 'scene.'  She sees the signals way ahead of anyone else, and when the argument arrives she is just not there.  No one loved an argument more than Dorothy, and it is surprising that she found Christie merely 'awkward.'

[On her religious radio plays] One cannot but agree that without The Man Born to Be King we should never have reached Jesus Christ Superstar via Godspell...


I include a photo of Sayers here especially for my brother, who asked me a few weeks ago who she was and whether he should try a mystery.
English literature memoir/biography