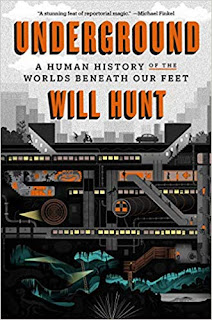 Underground: A Human History of the Worlds Beneath Our Feet, by Will Hunt

This was one of those books that just called my name when it showed up at work.  I like reading about under-cities...

Will Hunt's house happened to have an abandoned tunnel running under it, and exploring that tunnel sparked a life-long desire to explore the underworld.  Upon moving to New York City, Hunt joined the many people who explore subway tunnels...and eventually he talked a publisher into paying him to write a book about underground explorations.

Each chapter addresses a different part of the world and aspect of underground living.  There are the catacombs of Paris!  Scientific investigations into bacteria that live deep underground!  Hunt is privileged to visit ancient cave temples in Xibalba, a really ancient Aboriginal red ochre mine, and  even more ancient cave art in France.  He spends 24 hours alone in complete darkness in West Virginia.  He tells fascinating histories and tracks down subway graffiti artists.

I zoomed through this book and enjoyed every bit.  Hunt is not too self-conscious or overly poetic (like some exploration writers I could mention).  I don't dare give this book to my oldest kid, because said kid would promptly form ambitions to explore the New York subways and, as cool as that sounds, it also makes me very very nervous.  Highly recommended, as long as it's not my responsibility to keep you alive on this earth.
non-fiction