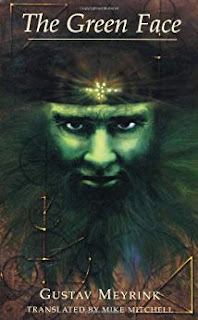 The Green Face, by Gustav Meyrink

Getting back into the swing of things -- I hope -- I'll start with a book I actually finished a while ago.  (As I type, the carpet guy is stretching the carpet, which seems to mean getting the edges in place.  Everything in the house is now so chaotic that there is very little for me to actually do except sit at the computer!  I already did the dishes.)

I've been meaning to read this novel for so long, but I only had it on Kindle, and I'm not very good at reading books on my phone.  This book turned out to be quite hard to get into; it starts off with a man going into a shop with a strange sign that is nearly unreadable on a phone.  But, as I mentioned a month or so ago, I found a paper copy at the giant research library I visited in July, and I read the first few chapters there, which helped me get into it.  Then I read a lot on the plane home, which got me about halfway through.  Progress was quite slow after that but I did it!  (Am I pleased that I did?  Read on.)

Gustav Meyrink was of German extraction but lived in Prague, which he hated, in the first part of the 20th century.  He failed at banking, tried translation, and also wrote a lot of weird stories.  The most famous (and so far, the best one I've read) is The Golem, published in 1915.  He followed it up with this novel in 1916, and then with Walpurgisnacht, which I read a while back without realizing that I should have read Green Face first.  Green Face is Meyrink's most mystical work, which makes it very mystical indeed; large chunks are given over to philosophical theory-spinning.

The story is set in Amsterdam, but I'm not at all sure that Meyrink ever visited the place.  I get the feeling he wanted a port city for his story, and called it Amsterdam while really writing about Prague, as usual.

So this guy Hauberisser goes into a magic/curiosity shop and has encounters with some strange customers, and also a terrifying old man with a greenish face and a black band around his head.   Then he finds some old documents hidden in his apartment, and meets a group of somewhat occult worshipers who are looking for enlightenment, or change, or eternal life, which is usually marked by an encounter with an old man with a greenish face.  He's probably Chidher Green, and it's implied that he's also the Wandering Jew.  Hauberisser spends most of the rest of the novel on a sort of quest to find Green again.  He also falls in love with Eva, one of the occult group members, and she loves him too but either ascends to another plane or dies, possibly both.  Then the world falls apart in an apocalypse.

It's a weird novel, not terribly comprehensible, and I wouldn't consider it Meyrink's best work by a long shot even without its worst flaw: the inclusion of a "Zulu" character who is portrayed in terms about as horrifying as they could possibly be. I thought he was a minor side character until about 70% of the way through, and then he wasn't.  I usually try to read books of the past without reacting too much to elements we now consider objectionable, but this was just super-duper-bad, folks, and I cannot recommend that anyone but a Meyrink completist (as I appear to be?) read it.

But you can have a few quotations:


Spectres, monstrous yet without form and only discernible through the devastation they wrought, had been called up by faceless and power-hungry bureaucrats in their secret seances and had devoured millions of innocent victims before returning to the sleep from which they had been roused.  But   there was another phantom, still more horrible, that had long since caught the foul stench of a decaying civilisation in its gaping nostrils and now raised its snake-wreathed countenance from the abyss where it had lain, to mock humanity with the realisation that the juggernaut they had driven for the last four years in the belief it would clear the world for a new generation of free men was a treadmill in which they were trapped for all time.  [Meyrink's description of WWI and its aftermath]

For a few centuries a diseased organism, so huge it eventually came to resemble a temple soaring up into the heavens, had been taken for culture; now it had collapsed, laying bare the decay within. Was not the bursting of an ulcer much less terrible than its constant growth?  [His opinion of Western civilization]

"From this example you can see that if he should appear to you as a man with a green face, his true countenance has still not been made manifest. But if you should see him in his true form, as a geometrical sign, as a seal in the sky which only you and no other can see, then know: you have been called to work miracles."

"The rationalists, who want to turn the people away from religion, do not know what they are doing. Truth is only for the few and should be kept secret from the masses; anyone who has only half understood it will find himself in a paradise devoid of colour when he dies."