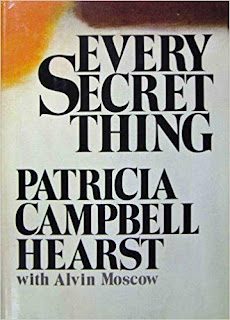 Every Secret Thing, by Patricia Hearst and Alvin Moscow

Well this one was a little out of character for me, but after reading the description on another blog I was intrigued.  I knew some, but not a lot, about the SLA and the Patty Hearst kidnapping.  This is her version of the story, published in 1982.  As I understand it, there are some different versions, and some documentaries and whatnot.  I read some of a piece from the late 70s that definitely cast her as a willing member of the SLA.  But back to this story...

Hearst starts with a short sketch of her early life as one of four Hearst daughters, wealthy and privileged but not famous.  At 18 she moved out to live with her boyfriend, a teacher at her former school (you can tell it was the early 70s because nobody seems to have had him arrested; she states definitively that she pursued him, but that's no excuse).  They moved to Berkeley, where he was doing grad work and she enrolled as an undergrad.  And then one day these random people showed up and kidnapped her.

The Symbionese Liberation Army was one of the small, very radical groups that kind of littered the ground in the late 60s and early 70s.  They despised the Weathermen as being too weak with their symbolic bombings that weren't supposed to injure people, and had assassinated Marcus Foster, the superintendent of Oakland schools.  After that they had to go underground, which meant hiding out in a small apartment with no outside contact.  Their intent was to kidnap the child of a very wealthy and influential person, and use her as a hostage to trade for their two imprisoned members.

They kept Patty Hearst tied up and blindfolded in a closet.  The bindings lasted some weeks; the blindfold for two months.  When the governor said that there was absolutely no way that any prisoner exchanges were going to happen (think of the ensuing deluge of kidnappings there would have been!), the SLA didn't know what to do.  Should they kill her?  Make different demands?  While they thought about it, they figured they should educate her properly, so they took turns telling her about SLA beliefs for hours; the rest of the time they kept a radio playing loudly in the closet so she wouldn't be able to hear their discussions.  With not much food (and that of almost no value; the SLA seems to have lived largely on starches) and no exercise or sun, she was malnourished and weak.  She figured she ought to play along and agree with whatever they said, since she didn't want to be killed.

After a couple of months of that, they offered Hearst a choice: she could join the SLA or leave.  This didn't seem like a real choice; she assumed that it was a test and they would kill her if she wanted to leave.  She'd been trying to convince them that she believed in their cause and that she no longer wanted to be a member of the bourgeoisie.  So she became a junior, untrusted member of the SLA.  By this time they had her convinced that if they didn't kill her, the FBI would.

This is what people argue over a lot; did Patty Hearst want to be an SLA terrorist, or was she brain-washed, or what?  I found that the story reminded me forcibly of Elizabeth Smart's story; here we have a victim who is kept imprisoned, without opportunity to communicate, and constantly harangued with a particular version of the world.  After a while, you lose your mind and fall victim to coercive persuasion, otherwise known as brain-washing.  Hearst did not try to escape her captors even when she had the opportunity; she says it never occurred to her, since as far as she knew, the only possible result would be her death.  Even the comments people made in the press about Hearst reminded me of things I saw said about Elizabeth Smart -- conjectures that she had voluntarily run away in order to live on the edge, things like that.  So I'm inclined to believe Hearst's version of the story, since it fits what I've seen elsewhere.

One thing this book makes really clear: if you take a very small group of people and cut them off from the rest of the world, they lose their minds.  The members of the SLA, who lived in a small enclosed place with each other 24/7, with terrible food, not a lot of sleep, and practically no fresh air, were losing their holds on reality.

It's a fascinating book and I'm inclined to search out the CNN documentary, which somebody told me had interviews with surviving SLA members (who?  a bunch of them died) for a different angle.