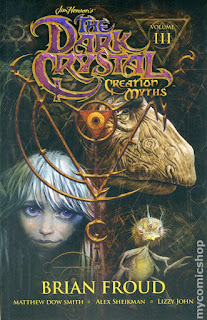 A couple of years ago, we bought these graphic novels for our oldest.  With the release of Netflix' and Jim Henson Studios' new Dark Crystal series imminent, I decided I'd better get with the program and read them.  I'm glad I did that before we started watching the series (we've finished episode 2; we are no good at binge-watching anything and like to digest in between episodes).

We got these in separate volumes; they were out of print at the time, but now everything is being re-published and you can get them in a collected volume as well.  So that's what I've linked to.

A mysterious storyteller narrates the beginning of Thra and its peoples.  We see the origin of Aughra,  the arrival of the urSkeks from another planet, and their eventual division.  Gelfling folktales are sprinkled throughout, such as 'How the Gelfling Maiden Got Her Wings' or tales of an adventurous sailor looking for the perfect song. 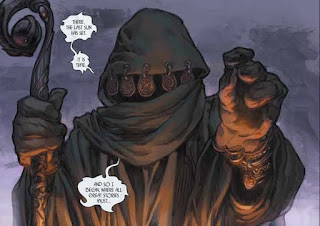 The major character here is Raunip, who is Aughra's son and kind of a patchwork creature with differing eyes.  He is nearly as intelligent and curious as his mother (and just where did the other half of him come from?), but he's also something of a rabble-rouser and very suspicious of the urSkeks, whom he sees as outsiders who should leave Thra.  What business do they have, building a castle around Thra's crystal?

By the end, the Mystics and Skeksis have divided and are just beginning to settle into their respective places

The art concepts, like all of the Dark Crystal world, is clearly the work of Brian Froud, whose imagination and love of grotesquerie is unbounded.  The origin stories are neat to read, and I like the folktales.  It should be noted that the new series does not exactly chime with these tales, and I kind of wish they did, but hey.  I can roll with it.

If you're a Dark Crystal fan, you'll want to read these.  Indeed, I expect I'm the last to the party and everyone else already has.  I include the trailer for the new series in case you live under a rock and haven't seen it yet, but really so I can tell you how much I want that book at 0:44.  I might have to make one.