An Autumn Riffle of Reviews

By Jean - November 25, 2018
I now have seven books sitting in front of me to review, and some of them were read well before the fire.  Now I can barely remember them.  So, I'm going to do quickie reviews of all of them, and consider that a fresh start to the winter season.

The Infernal Library: On Dictators, the Books They Wrote, and Other Catastrophes of Literacy, by Daniel Kalder:   Oh boy, this was not to be missed!  How do you pass up that title?  Kalder gives us a tour of the terrible, awful literary productions of 20th century dictators, from Lenin on down.  The material is no fun, but he helps the reader survive with a large dose of wit.  The big names go first, with Mao taking up quite a lot of space, but there's room for a whole lot of less-famous dictators, such as Salazar of Portugal and Hoxha of Armenia.  Everybody felt the need to write books that would dictate how the world should work: Gaddafi wrote the Green Book, Saddam Hussein wrote allegorical romance novels (!), and we finish off with the surreal contribution of the Ruhmana in Turkmenistan.

There is so much that is quotable, so much to fascinate, but it's been too long and I'm not up to writing the post this book deserves.  I will only quote the early Bolshevik Tkachev, who "told his sister that everyone over the age of twenty-five should be killed, as they were incapable of self-sacrifice." 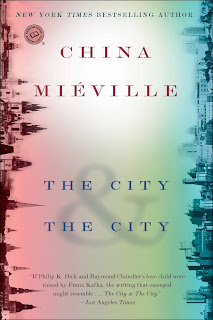 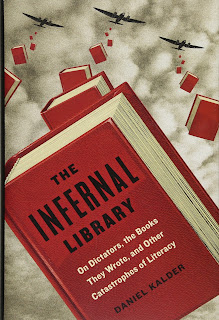 The City & The City, by China Miéville:  Guess what -- China Miéville is a dude, who knew?  This was my first Miéville novel, and I read it because Chris at Calmgrove thought it was great and it sounded interesting.  It's a hard-boiled urban detective novel, with Inspector Borlú after a murderer....except that Borlú lives in Besźel, and the victim was from Ul Qoma, Besźel's sister and rival city.  The two cities occupy the same space, perhaps in two dimensions?  But for one to acknowledge the other is Breach, the worst crime of all.

It's a fascinating concept and leaves the reader with Questions that I suppose should not be answered.  (The longer I read, the less sure I was that there were two cities.)  I really, really enjoyed the semi-Eastern/Southern European setting, maybe between Romania and Bulgaria?  A gripping story and setting; I wanted more.

It turns out that the BBC made a TV series of this novel just earlier this year; has anybody seen it?

The Aleph, and Other Stories, by Jorge Luis Borges:  I really like Borges' short stories (as who does not?), at least, I liked Labyrinths, and now I've enjoyed these too.  They are very much in the same vein, which is all to the good, and I'm not sure what else to say about them now.  I particularly enjoyed "The Zahir," "The Immortal," two consecutive stories about labyrinths, and "The Aleph."  There is also a collection of short pieces that are not stories, just...bits and bobs.  Very good stuff. 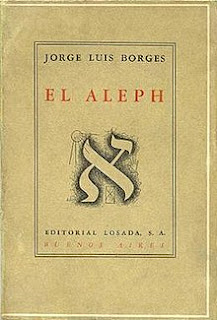 Greenmantle, by John Buchan:  I was looking to finish off my Back to the Classics Challenge, which requires a classic crime novel.  My problem is that I read Sayers, Marsh, Christie, and the other classic Golden Age mystery authors a lot.  It was hard to find one I haven't already read several times over -- I'm good at forgetting who the murderer is.  But I also had the four Richard Hannay adventures -- The Thirty-Nine Steps is the famous one, which I've read twice, so I figured on reading Greenmantle, the next adventure.  Being set in WWI, it seemed appropriate for the 100th anniversary of Armistice Day, and also it was something I could focus on while the fire was going on and I was sick.

It's 1915, and Hannay is called from the front to go on a spy mission with two companions.  The Germans are going to raise the Middle East with some secret weapon they have, but there are only a couple of clues.  What could it be?  If the Germans succeed, the war will be lost.  Each companion sets out across Europe to see what he can find out.  They'll meet at Constantinople to share their discoveries.

It's a fun adventure novel, as long as you can take the constant theme of the down-to-earth, honest Englishman up against a host of national stereotypes.  It's like living in Captain Hastings' head.  In fact, I'd bet money that Christie was poking fun at the Hannay type with Hastings!  It hasn't aged all that well.  But it was kind of fun to read one of the prototype spy novels.

The Glass Bead Game, by Hermann Hesse: At last, I have finished it!  I started in October, in response to the Classics Club's dare to read a scary book -- one that scared me.  I've been wanting to read this for a couple of years, but I was also pretty intimidated.

In the 23rd century, society has split its scholars off into their own province of Castalia.  At the price of living like monks without religion, these men (they're all men for some reason) can live lives of pure research and learning.  The crown of their world is the Glass Bead Game, in which they use symbols to express ideas, making beautiful patterns and paradoxes.  (The glass beads were replaced by symbols long ago.)  This book purports to be a collection of documents gathered by Castalians even further in the future, describing the life and works of Joseph Knecht, a brilliant scholar who rises to become the Magister Ludi, the Master of the Game.  And then...he quits.

It's very long, and interesting to read, but strange.  I'm not sure it's exactly a novel.  I liked it, though, and better than Siddhartha or Steppenwolf. 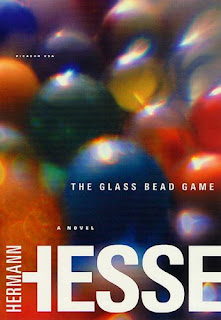 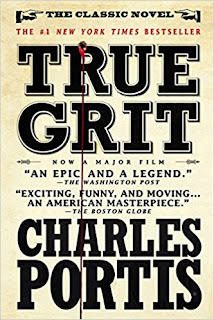 True Grit, by Charles Portis:  I've never read a western!  I had no idea that the protagonist would be a 14-year-old girl who heads out to avenger her father's murder.  Mattie is awesome.  Portis gives her this great voice; she's narrating as an old lady telling what she did as a girl, and she is both a prim  Victorian and a tough frontier girl with a head for business.  Mattie hires a marshal to hunt her father's murderer into Indian Territory, but to his horror, she insists on going along to see that things are done properly.  This is a great story that deserves its place as a modern classic.  Now I think I'd quite like to see the movie from a couple years ago. 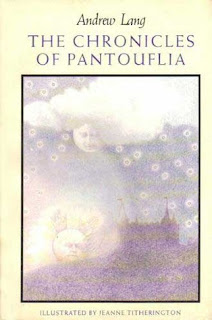 The Chronicles of Pantouflia, by Andrew Lang:  This was a fun read.  Andrew Lang was the fellow who collected and edited the Color Fairy Books -- you know, the Blue Fairy Book and so on.  (Why yes, I do own them all.)  He also did pretty good collections of King Arthur and Robin Hood -- a little more difficult in language than Roger Lancelyn Green's excellent books, but not as annoyingly full of varlets and forsooths as Howard Pyle's.

Well, Lang also wrote some comic fairy tales: first, the story of Prince Prigio, who was given the gift of knowing too much for everybody else's tastes.  Prigio is the most annoying know-it-all kid you ever met, and doesn't believe in magic despite living in a fairy-tale kingdom.  Then, the story of Prigio's son Riccardo, a boy of action and daring who depends too much on the magical tools inherited from his father.  They're quite funny, and remind me very much of E. Nesbit's fairy tales as found in the Book of Dragons or the Magic World.  I think I got this free on Kindle, or for practically nothing.


Phew!  If you've stuck around this long, thank you for your patience.  We shall now continue with the regular booky posts as we head into December.  Time to wrap up the 2018 challenges and get ready for 2019 reading!
American literature books children's literature Germanic literature history Latin American literature read around the world TBR challenge