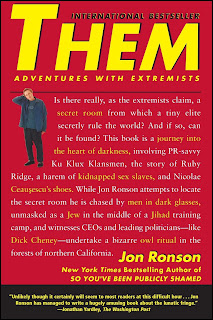 THEM: Adventures With Extremists, by Jon Ronson

I've been on a bit of a Ronson spree, I guess, even though I didn't know anything about him until I'd already started.  I knew Ronson as the author of So You've Been Publicly Shamed, a book I liked.  I got this one off the donation table, and then another, and only when I was almost done with them did I find out that he also wrote The Men Who Stare at Goats and is apparently quite well known -- just not to me.  Wikipedia calls him a gonzo journalist who assumes a "faux-naif" persona in his writing.

This is Ronson's second book, written over some time and published in 2001, "a snapshot of life in the Western world on September 10, 2001," when he thought all these people he was interviewing were getting very dramatic over nothing much and nothing would really happen.  By the time he wrote the foreword of my 2002 edition, things looked different.  And now, in 2018, they look different again.

Each chapter covers a different eccentric paranoiac sort of person, but there's also a common thread linking them and Ronson sometimes circles back to people.

He starts with Omar Bakri Mohammed, one of the UK's loudest and most extreme Islamicists, and portrays him as a very strange guy -- exactly as you'd expect in public, but weirdly friendly and enthusiastic in private.   Then he visits people in connection with the Ruby Ridge disaster (an incident that shows the US government's talent in growing its own enemies).

After that, we're ready to jump into the deep waters of theories held by several different extremist groups -- such as the Bilderberg Group.  Is it a group of high-powered people who like to get together and discuss business and democracy (on the assumption that tyranny gets in the way of business), or it is a secret cabal of world rulers who direct every war, every disaster, everything that happens?  And all this is tangled up with anti-Semitism.  As Tom Lehrer said, "...and everybody hates the Jews!"*

In fact, a lot of this stuff is so intertwined with anti-Semitism that it can be hard to pin down just what the deal is.  Are these folks using code words, or are some of them not?  Ronson is himself Jewish, and winds up in some interesting situations.  (Jihad camps, KKK meetings...) He meets up with the Anti-Defamation League, many of which think David Icke doesn't really believe in lizard aliens, he just means Jews -- though a meeting with Icke's people starts to convince them that Icke really does believe in lizard aliens.

So, yep, we also meet David Icke.  And a couple of KKK leaders, one of whom wants to revamp the KKK image in a friendlier, non-hatey fashion.  And Ian Paisley on a preaching tour in Africa (I had no idea).   And Alex Jones, who is still going strong today.  It was interesting to me to read about a sort of early version of Jones; I never heard of the guy till about 2010, when I went to my high-school reunion and discovered that my prom date had become a 9/11 Truther, anti-vaxxer, and Jones fan (he has since left Jones behind as far as I know, and is now a flat-earther).  So that was a surprise.

The final climax is a wowzer.  Ronson gets together with a couple of people -- and then Alex Jones wants to go along -- to 'infiltrate' an annual gathering in Bohemian Grove in Northern California, where the elite mingle and, er, sacrifice to a giant stone owl?  Well, where Alex Jones sees devil-worship, Ronson describes -- or at least it sounds to me like -- a Victorian's idea of a Shakepearean revel, in which the actors banish Care.  It sounds more like old-fashioned fraternal order stuff than anything else.  Jones' video is found here at this Washington Post article, you can watch the whole thing if you want.

A very interesting read, with lots to think about.  Feels both outdated and completely relevant.

*From Tom Lehrer's song "National Brotherhood Week" -- give it a listen if you're not familiar with it.
history non-fiction