By Jean - November 19, 2018
Hi folks, I guess I ought to start getting back to books, but before that I want to talk a little bit more about the news around here.  The fire is still not fully contained, but they've been gaining about 5% a day, which is amazing to me.  As far as I can tell, tremendous efforts by both firefighters and townsfolk have saved Stirling City (though I don't think the danger is entirely over there).  We're supposed to get heavy rain starting tomorrow, which is both a blessing and a problem; it will help tremendously and lessen further fire danger, but it will also produce a lot of toxic sludge, which will enter streams, and without healthy plants to hold the soil down, there may be mudslides.  There doesn't seem to be any way to stop those things from happening.

They're starting to let people in a little teeny bit, but mostly they're still looking for the dead and surveying the damage.  There are still lots of people who don't know whether their homes are there or not.  And still hundreds of people in shelters.  The Walmart camping town was supposed to be dismantled yesterday; with the impending rain, it's not safe, and there are more real shelters now, so they're trying to get everyone into a real place with a roof and a bed and a proper bathroom.

The smoke has been terrible.  The other day, we had the worst air quality in the world, with AQIs of over 500.  Yesterday we saw blue sky in the morning, and today it looks much better.  I took a walk!  Outside!  Still with a mask on, but, outside!  It's still really important to wear a mask; there is so much weird gunk in the air, not just woodsmoke.  When it starts raining tomorrow, it will be nice to have it washed out of the air...but they're already issuing warnings about how filthy the rain will be.

The other reason I was so thrilled to be outside this morning is that I went down the other day with the tummy bug that's been going around.  Luckily it's short-lived, so I was utterly miserable for one day, wobbly for another, and then pretty human again.  I was still technically contagious on that third day, though, so I only re-entered the world yesterday.  Mostly I feel lucky that I've got a house to be miserable in, instead of a tent.

I'm off work for another week -- my college is determined to open on Monday, despite some damage on campus, tons of ash, and hundreds of displaced students and faculty/staff.  They've been working hard to help students with massive needs and make sure they'll get credit for their courses.  The K-12 schools have a little more leeway and have decided to stay closed for an extra week after that.  Figuring out how to squish 5000 displaced children into new schools is a tricky prospect, and there is an effort to attract outside funding for 100 portable classrooms.  You can donate to the school fire fund here.

One funny thing has happened; our county sheriff has now been through so much (the near-failure of the dam, a different fire, the Trivia Bee, this awful thing) that people have started making Chuck Norris memes about him.  So that's my illustration for today's post: 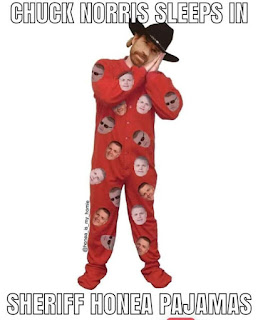