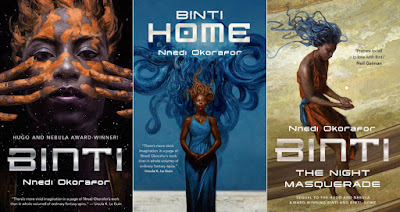 Centuries in the future, Binti is a member of the tiny Himba tribe: mathematical geniuses who specialize in producing advanced electronics, hemmed in by the much more populous and disdainful Khoush warriors.  Himba never leave home, but Binti's sole ambition is to attend Oomza University, the galactic center of learning where humans are relative new-comers.  She has little time to dwell on the risk she is taking as the ship carrying her to Oomza is attacked by the Meduse, a jellyfish-like race locked in war with the Khoush.

Through three books, Binti tries to make sense of her situation, which gets ever more complex, as the Meduse, Khoush, Himba and Desert People converge.  Binti may be able to play peacemaker...or she may be overwhelmed by the forces of war.


These three short novellas came out about a year apart.  Together they would make up a good-sized SF novel, and I'd recommend reading them all at once now that they're all published.  I enjoyed them a lot!

You sometimes see an argument around the bookly Internet over whether non-English words should be italicized (thus sticking out as foreign) or incorporated more closely into the text (thus accepted as ordinary).  I never cared much, really, but I now cast my vote for not italicizing.  The one thing that got annoying about Binti was that Binti uses otjize, a local clay mixed with oils, all the time.  The word is italicized, and it's used so often that it becomes grating to have it highlighted every single time.