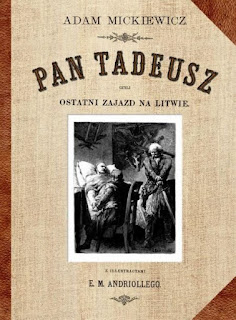 Pan Tadeusz: The Last Foray in Lithuania, by Adam Mickiewicz

It's the Polish national epic poem!  Also the last great European epic poem, if you believe the comments.  I guess there weren't a lot of epic poems written after 1834, so it's probably fair enough.  It's twelve books long and was written in Polish alexandrines, but my translation is just prose.  It ends up reading like a rather odd novel.  Adam Mickiewicz was a poet and philosopher, and he was living in exile in Paris when he wrote this; otherwise the Russians would never have allowed it to be published.  At the time of writing, Poland had been partitioned into three pieces and shared out between Russia, Prussia, and Austria, but the story takes place at a time when Napoleon had interrupted that partition and established a Duchy of Warsaw.  Note, though, that the geographic area in the story is always called Lithuania.  It's the name of the region, not of the country, and not political.  It's confusing to a modern reader!

The story is set in 1811 (for five days) and 1812 (just two days).  The background is that the Poles in a village in the Russian sector, oppressed by the Muscovites, are placing great hope in the imminent arrival of Napoleon's conquering army.  They plan to join up, fight for Polish independence, and become part of a real Polish state.  But in the foreground, we have two feuding families, the Horezkos and the Soplicas.  Pan Tadeusz is the young heir to the Soplicas; his father, a famous fighter, is disgraced and missing.  Zosia is a maiden of the Horezko family.  Their union would end the feud, but meanwhile everybody wants to fight the Russians. 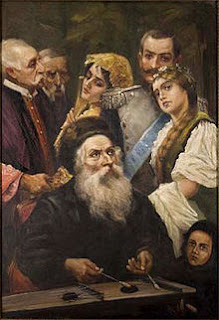 The poem starts off small and focused, and with every book, the scope becomes larger.  We start at a farm, move to a castle, then the village, and a battle, until the fate of all Poland is involved.  In 1811, in just a few days, Tadeusz arrives, inspires a real fight between the families, and falls for Zosia (after some mis-steps).  Everybody is dying to fight the Russians and they all go off sort of half-cocked for a small battle -- "the last foray in Lithuania."  After things calm down a bit, Tadeusz and Zosia are betrothed, and off he goes to the wars.  A year later, they celebrate the marriage with great hopes for the future, but portents show that it's not going to be that way.

All things Polish and homely are celebrated; this is an early example of the nationalism that grew in European nations in the 19th century, starting off with folk music and literature, and which quite soon turned into ethnic hatred.  At one point, Tadeusz chastises the fashionably Italian-minded Count:

Is not our honest birch tree fairer, which is like a village woman weeping for her son, or a widow for her husband, who wrings her hands and lets fall over her shoulders to the ground the stream of her loose tresses?  Mute with grief, how eloquently she sobs with her form!  Count, if you are in love with painting, why do you not paint our own trees, among which you are sitting?

The Pole, though famous among the nations because he loves his native land more than life, is nevertheless always prepared to abandon it, and to travel to the ends of the earth, to live long years in poverty and contempt, struggling with men and with fate -- so long as amid the storm there shines upon him this hope, that he is serving the Fatherland.

And of course nationalism had to involve a whole lot of anti-Semitism; Pan Tadeusz certainly has a bit of that too, mostly in using common idioms.  Then there are local Jews in the story, who are sometimes treated with fondness and respect, but always as strangers and not-Poles.   (The illustration above is of the wedding party, where Zosia begs the elderly Jew Jankiel to play the dulcimer for her.)

This is one of those books that has inspired a whole constellation of things without you ever knowing about it until you read it and discover.   The story of Pan Tadeusz has been illustrated and painted many times.  There was a movie made in 1999, which I would very much like to see!  There is a Pan Tadeusz vodka, a play, and everything else.