I Grew Up in Latvia 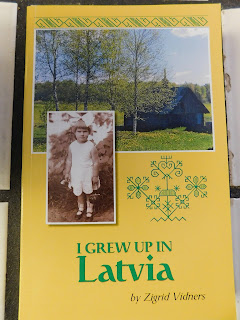 A while back, I was at the public library and saw this book in a display of local authors.  "I could use a Latvia book for the Read Around the Whole World project!" I thought, and so here I am with a nice memoir.  It's the first of two, and covers Zigrid Vidners' life until 1944, when at the age of 18 she had to leave her Latvian homeland.  The next one talks about her subsequent experiences in a German village, refugee camp, and then England and America.  Vidners retired to my own town, which is how I know about the books at all.

Vidners describes her early childhood and surroundings with a lot of love.  She lived in Riga much of the time, with her father an officer in the Latvian army, but his real dream was to run the family farm where grandparents already lived, so summers were spent there and after a while they lived there full-time.  After the move, Vidners would go to live with an aunt during the school year.

During her childhood years, Latvia had at last achieved independence and was thrilled about it, having spent more years in empires than it had been independent.  There were statues of Mother Latvia, and folksongs and folk art were a treasured cultural heritage.  Then the Russians invaded and simply took over, imposing communism on an unwilling populace.  Vidners writes nostalgically about the naive and stubborn resistance she and her school friends showed; they were at the perfect age to think of it as both a real way to fight a little bit, and as a game.  They soon learned that the game had serious rules, though, and Vidners' own family was in danger, as being both military and a bit bourgeois.  They were due to disappear, except the Germans invaded instead.

The Germans were almost welcome as deliverers from the Russians, and some Latvians were willing to enlist in the German army in hopes of keeping the Russians at bay.  All of the men and boys were drafted soon enough anyway, and pretty soon they found out that the Germans were using them as cannon fodder.  Vidners did not know it at the time and it isn't mentioned, but the Germans planned to cut the Latvian population in half.  She also never mentions the Latvian Jewish population -- by then she was at the farm full time and may not have known -- but they were all taken away.

Despite living through both Russian and German occupation, this is a memoir largely dedicated to life on a farm and a love of nature and solitude.  Vidners was fortunate to live on a fairly remote farm, thus escaping many of the hardships of the war, but I think she also downplays the dangers she experienced.  She is just matter-of-fact and undramatic about them.

Once the Russians started winning, Vidners' family had a lot to worry about.  Just as she was finding first love with a neighbor boy and becoming an independent young woman, it became imperative to flee.  The elderly grandparents refused to go; her father, older brother, and young man were in the army; so she, her mother, and her baby brother hopped a ship to Germany to become refugees.  As far as I can tell, none of the men made it out.

The story ends with her leaving Latvia and continues in the next book, A Branch Without a Tree, which I now have from the library.  It's quite long though, and I'm not sure I'll have time to read it.  I really want to know what happens, though...
memoir/biography read around the world