CC Spin: And So Flows History 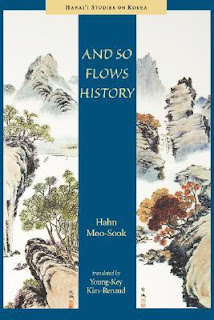 And So Flows History, by Hahn Moo-Souk

The three-generational family epic is, I think, quite a popular kind of story, and it's not one that I usually read.  I kind of have a feeling that it may be really popular in Korean media!  This novel is a classic and very popular example of the genre, but it's also an unusual one.  The family saga is kind of messy, I guess I would say -- it's realistic.  The family members are all over the place.  And the whole story starts with a rape.

Near the end of the 19th century, as the Chosun dynasty is waning, the Cho family is one of middling wealth and importance.  The head of the family, Tongjun, takes advantage of everyone's absence at a festival and rapes Puyong, a young household slave girl, which produces a daughter and ruins Puyong's plans.  From there we launch into a complex story involving the Cho extended family, the fortunes of several family servants, and the Cho in-laws, the Yi family.  Most of the Chos do not do all that well; one son is intelligent but weak, another honors tradition without understanding it.   Their sister marries into the Yi family, which in contrast appears to discard tradition but in fact honors it much more by acting rightly.   Cho fortunes mostly fall, the servants scatter and take advantage of changing times, and the Yi brothers sacrifice themselves for the right, which in turn inspires a ne'er-do-well Cho cousin to dedicate himself to the cause of Korean independence.

Nearly all of this takes place under the shadow of the Japanese occupation of Korea, which began in 1910 and ended in 1945.   It is sometimes difficult for a Western reader to follow the allusions to historical events; they can be subtle, so it might be a good idea to spend a few minutes reading about Korea from the 1890s on.  The Korean Empire became a Japanese protectorate in 1905, with annexation following in 1910.

This is a highly patriotic novel, written in 1948, just after the end of the occupation (the story stops in 1945 and does not address subsequent political tensions).  The heroes sacrifice themselves for the cause of Korean independence, and the weasely characters collaborate with their occupiers.  Other good characters work for Korean independence too, often by gaining education and benefiting other Koreans.  The place to go for that education may well be Japan, but it's important to gain the education without absorbing Japanese ideas about their superiority.

A startling element of the patriotism (for me, anyway) was that Hahn has no compunction about describing the Japanese occupiers in quite vindictive terms.  While a modern novelist would probably describe the actions without using the narrative voice to, I guess, pass judgement, Hahn has no hesitation whatever in using harsh language about Japanese soldiers and officials.  This is perfectly understandable, of course; it's just that the modern reader doesn't expect it.

Hahn Moo-Sook was actually a young mother of several children (at least 4; a 1951 photo shows her with 5 children) when she decided to enter a newspaper's writing contest.  I haven't been able to find out just how long it took her to write this novel, but apparently it was on the fast side.  She won the contest and the book was printed serially.  I must say, I'm pretty impressed.  Imagine living in a post-war Korea, on the brink of another war, with children to care for, and writing a fairly long and complex novel.

I actually finished the novel a few weeks ago, but am now writing the post just as North and South Korean leaders are meeting each other and signing peace agreements -- a development that strikes me as just as stunning as the fall of the Berlin Wall nearly 30 years ago.  Seems like a good time to read a Korean novel; why not give this one a try?
Asian literature CC Spin read around the world