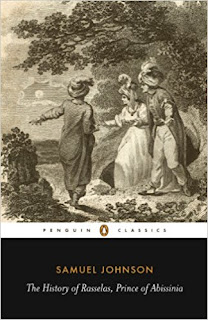 The History of Rasselas, Prince of Abyssinia, by Samuel Johnson

In 1759, Doctor Johnson spent a week writing Rasselas in order to pay for his mother's funeral.  It's not really a novel; it's a meditation on whether human beings can attain happiness, in story form.  I guess that makes it a fable.  It's sometimes compared with Voltaire's Candide, which was published in the same year, because they both ask questions about the human condition.  But Candide is an angry satire about the problems of evil and suffering, so while the two works are wandering around the same neighborhood, they don't quite meet.

In Abyssinia (Ethiopia), all the children of the royal house live in the Happy Valley until such time as they are called upon to rule the country.  Rasselas the prince and his sister Nekayah have thus never seen ordinary human society; they've spent their lives in this lush valley, where luxury and constant entertainment are the rule.  Rasselas finds himself inexplicably discontented with his life, and plots with a poet/engineer/courtier, Imlac, to escape.  Nekayah and her favorite maid Pekuah insist on coming too, and so they venture out (with plenty of jewels on hand) to see the world.  Arriving in Cairo, they inspect every form of living that they can, looking for a method that will produce happiness.

Rasselas tries out philosophy (cold comfort when tragedy arrives) and dissipation.  Nekayah studies domestic family life.  They visit a hermit.  No method seems to answer.  They decide to travel and learn, which leads to Pekuah's abduction by brigands, and she has an adventure too.  At last they meet an astronomer who seems very happy -- he gets to study and everything -- but he turns out to suffer from a delusion.  Is benign madness the only happiness??  The ladies' society helps him to improve, and he then advises them of his own regrets in life.  Rasselas and his sister never do figure out how to be happy all the time.  I guess that's just not in the cards of this mortal life.

Johnson was going along a little bit with the fashion of the time for Oriental tales, but really, it's a fable that might as well be set in Illyria or Guilder.  It's not an Orientalist tale and fortunately contains almost nothing about the Mystic East.

This is such an interesting little fable, though, and it's really not long at all.  My copy is 95 pages, and so I'm wondering what the deal could be with the scan I saw of an early edition in two volumes.  They must be very, very slim volumes!  It's such an easy read that I would recommend it to anyone looking for a taste of Johnson.  I disagree with the guy in The Moving Toyshop who nominates it as an Unreadable Book: