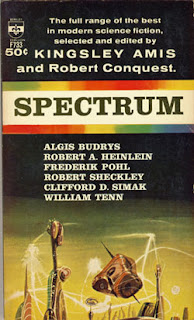 January is over, and I didn't post about all my books!  I got sick and have been curled up on the couch, coughing a lot, instead of doing much else (besides, of course, watching a lot of news).   So I'm going to do a riffle of reviews:

I looked at this and thought, "Kingsley Amis and science fiction?  What?"  It turns out that he'd written a book about SF and then wound up producing a series of these Spectrum collections.  This is the first, and it's stuffed with big names: Pohl, Simak, Budrys, Heinlein.  Most of the stories were very good, though it kicks off with the Pohl story which is over-long.  I liked the Simak story, the Budrys one was typical (which means it was weird and macho, but interesting), and the Heinlein is a very early story featuring a causal loop. 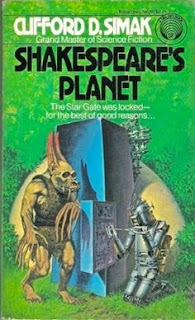 This was a pretty good read, one of the best on this list.  An explorer ship with its crew in cold sleep has been traveling for over a thousand years when it finally lands on a viable planet.  Carter finds himself nearly alone, with only a robot and an alien carnivore for company.  The planet has a stargate, but it's closed; why?  And what are Carnivore and Carter going to do?

I wound up picking this last one up, not expecting much.  It was pretty good though!  Thorby is sold off, again, at a young age, but this time he's picked up for almost nothing by a beggar.  He grows up in the slums of a cosmopolitan world where slavery is a major business, but when his adopted father dies, he joins a ship of legal traders, and then the military of the main group of worlds, where he discovers who he is and dedicates his life to fighting slavery. 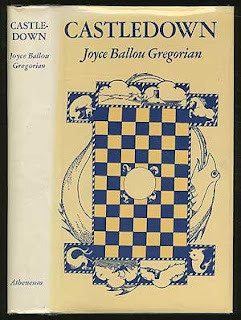 The Broken Citadel and Castledown, by Joyce Ballou Gregorian (1973 I think)

I've had these two books sitting around for years.  It turns out to be most of a trilogy, and now I need to hunt down the last one!  The Broken Citadel is fairly typical middle-grade sword and sorcery; Sibby, age 11, is flung into another world, where she joins a group of travelers hoping to rescue a captive princess.  She has a lot more adventures after that!  Then, in Castledown, Sibyl is 18 and a college student when she is summoned back.  This one is quite a bit more innovative, and really intriguing.  The last book is The Great Wheel, which features Sibyl in her 30s.  Now that sounds really interesting!  You don't often get a grown woman being whisked off to another world. 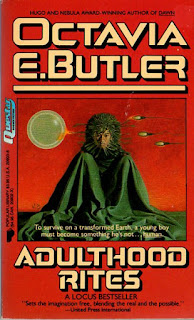 This isn't a vintage read, but I'm throwing it in anyway.  Adulthood Rites is the second book in the Xenogenesis trilogy, and it's about Lilith's son, Akin.  Akin looks nearly human (for now) but is half Oankali; the only way for humans to have children is to cooperate with the Oankalis' program of genetic trading.  Renegade humans are now so desperate for children that they will kidnap the half-aliens, and Akin spends some years in a renegade village, away from his family.  There he becomes convinced that humans must be allowed to have their own children, and eventually embarks on a mission to persuade the Oankali to go along with the idea.

This second volume is just as good as the first one, and has all sorts of intriguing questions bouncing around.  I'm looking forward to #3, Imago, which is about yet another person (I hope I get news of Akin, though).

Well, it was a very science-fictiony January for Howling Frog Books, and we have Little Red Reviewer to thank for it.  I always get a lot of fun out of this event.  Looking forward to next year.... 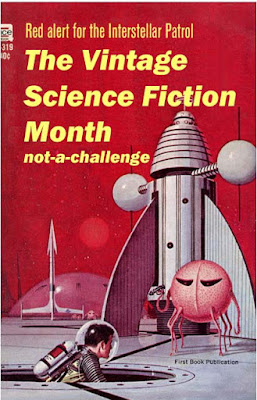