By Jean - February 15, 2017
I have read almost nothing in the past few days, much less been able to blog; real life has been too exciting to allow for it.  On Sunday afternoon, the nearby town of Oroville was put under an evacuation order when officials realized that the reservoir's emergency spillway might fail--within the hour.


This situation had been developing all week, but all of a sudden it turned really dangerous.  Our family was perfectly safe; we live north, and the water would go south, so everyone was to evacuate north to our area.  As the evacuation order expanded further downriver, other people had to head south to Sacramento.  The best part of three counties was evacuated as the dam managers frantically tried to mitigate the danger.  Happily, the spillway did not fail, but we're all nervous; a lot of rain is coming in and it's possible this will all be replayed.  Everyone is back home now, but could have to leave again.

Rather than explain all the technical details here (which I could do; I know a lot more about that dam now than I did last week!) I'll just link you to this short video that summarizes the situation.  A map and diagrams are also helpful! 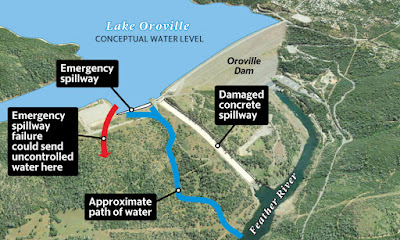 Obviously I couldn't concentrate on Herodotus and Spenser; they were not a priority.  We spent our time either obsessively watching news or preparing to help out.  Cross your fingers and hope this all goes well.