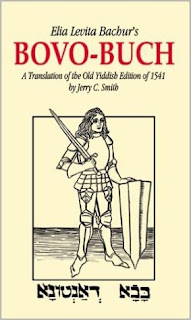 Oh, this was so much fun!  Back in the early 1500s, Yiddish-speaking folks liked tales of knightly adventure too.  Elia Bachur (properly, Elijah ha-Levi ben Asher Ashkenazi) was a famous grammarian and linguist in Hebrew, and he also wrote popular Yiddish works under the pen name of Elia Bachur.  He was born near Nuremburg in 1469, but spent most of his life in Italy, where he could more easily pursue his studies.  (Nuremburg expelled all of its Jews in 1499, just a few years after Bachur left.)

Bovo-Buch was first written in verse in 1507, but did not see print until 1541, when Bachur's grandsons, Joseph and Elia, decided to print all of his Yiddish works.  Bovo-Buch was the first they printed, and the only one to survive to today.  It became hugely popular.  Two hundred years later it was still going strong, and was reshaped into prose.  By that time it was known as Bove-Mayse and gave rise to the phrase bobe mayse, old wives' tale.

Bovo d'Antona is a knight of great prowess, but, betrayed by his own mother, he wanders long.  Drusiana is his true love, so he has to rescue her and fight villains, and generally have adventures until at long last he can settle down with his love.

Bachur's tale is a retelling of a story that was popular all over Europe.  Bachur used the Italian version, Buouo d'Antona, but in English he's Bevis of Hampton and in French, Beuve d'Hamtone -- all derived from some single source, now lost.  By this time, tales of knightly prowess were old-fashioned and quaint, and Bachur makes it funny and satirical as well (sometimes it's downright earthy!).  Bovo, the perfect knight, is not always very perfect and can be entirely oblivious.

Bovo's story is also adapted to be Jewish.  Most of the knights, queens, and kings are Jewish, and use Yiddish phrases, which is really fun.  They also meet quite a few Muslims, either in love or war, and at one point Bovo is told by a sultan that he'll be pardoned if he'll "become a good heathen."  Bovo gives a spirited speech of refusal more suited to be aimed at a Christian, and nearly marries the sultan's daughter.

I just got a big kick out of this fun Yiddish knightly tale.