It's been about nine years since I last read The Hobbit, which is quite long enough to have forgotten some things.  (Last time I read it aloud to a 7yo, and she found the story so exciting, she had to spend much of the time jumping around the room.)  It was just delightful to read it again and notice all the details.

The Hobbit was written as a children's story, and I think some people find it surprising or jarring to see it told in child's terms.  The dwarves are not as serious and solemn as we expect--in fact they complain a lot and are not overly brave--and the elves actually play tricks on people and sing silly songs.  It can be hard to reconcile Tolkien's later elves with these ones, but it's also not something I'm inclined to worry over.  Still, since my last exposure to Middle-Earth was the movies,* it took me by surprise every so often.

Smaug's ending is a bit puzzling to me.  He flies off and the dwarves never have to engage him at all.  I like that Bard is the one who kills him, yet it's a bit odd that Smaug can't get to Laketown, and I'm not at all clear on why that is.  It's wonderful that Smaug's death is not at all the end of the story, as we might expect from other, lighter tales.  No, it only kicks off a whole new series of difficulties that must be solved; and the dwarves are very much part of the problem.  They are no heroes.  Bilbo is the closest to being a hero, and yet he is mostly only a frightened little hobbit who nevertheless tries to do things for the best.  Much more like real life, really; and I suppose that when a young Tolkien was stuck in World War I, he noticed that there weren't a lot of mighty heroes to be seen -- just scared people trying to do their best. 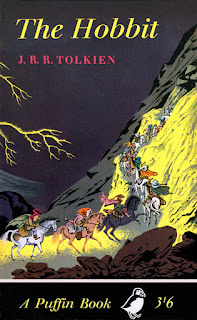 Reading The Hobbit was lovely, and now I'm looking forward to the Lord of the Rings; it's really been a long time since I read those properly!  (My husband did that read-aloud, and my patchy listening might not count as a 'reading.')

* We went and saw the first two Hobbit movies, but found the second one disappointing enough that we did not go to see the third.  Too many Jackson-type monsters and monster gags, not enough hobbit.  Though as the mother of a red-headed girl with ninja ambitions, I may be one of the few who did not quibble with the addition of Tauriel!  Her contrived romance with Kili, now that was annoying.