The World Between Two Covers: Reading the Globe 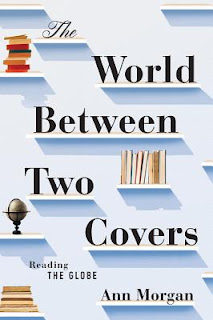 The World Between Two Covers: Reading the Globe, by Ann Morgan

You all know I like to read books from all over the world, so I was interested in this title right away.  I thought it would consist of thoughts about literature from all over the world.  Then I was surprised to find that it is actually a blog-project book.  Then I was surprised again to find out that it's not really quite a blog-project book, since it isn't a description of the project; it's more thoughts on what 'world literature' is, what it means to read the globe, and issues pertaining thereunto, which developed as a result of the blog project.

A few years ago, Morgan was doing a blog project where she read only women authors for a year, and then she realized that she hadn't read anything not written in English since college.  Her shelves were stuffed with Brits and Americans and a few other English-speakers, and that...was about it.  So she decided to read one book from each country in the world, in a year.  This would be (approximately) 196 books.

I have to admit to a little bit of personal chagrin at the beginning. I looked at that and went "Wait a minute.  I try to read books from all over.  Nobody wants to hand me a book deal.  What's Ann Morgan got that I haven't got?"  The obvious answer to this is:
Because that strikes me as a really insane project.  I could not possibly have that kind of laser focus.  I can't read that many novels--nearly all contemporary--with hardly any non-fiction, I can't limit myself to one particular selection of books, and I can't read for 4 hours a day, which is pretty much what she had to do, as well as pick shorter novels (except, for some reason, Ulysses for Ireland).  I am a literary butterfly.  Like the fellow in the Wodehouse novel, I flit and sip.  If I feel like reading something I'm jolly well going to read it, never mind the schedule.

Well, on to the actual book--first it had to occur to her to read around the world, and so she spends a good deal of time talking about how easy it is to read in an insular fashion.  After all, mostly we like to read books that are a bit familiar, where we already know something about it.  Living in the English-speaking world, our books dominate, and except for the standard well-known exceptions, we rarely see others.  It takes a certain amount of effort to go looking for more books from other places, and if you're trying to get something from everywhere, it can be extremely difficult.  Not every country has a book industry.  And how do you get a book from North Korea anyhow?  Morgan wound up reading a few unpublished manuscripts or personal writings, and in one case, a brochure.

Then there are the rather uncomfortable aspects of reading something from an extremely different culture.  The jokes don't always translate well.  The moral or cultural standards are sometimes strange or offensive to others.  The reader will run into descriptions of Westerners that are not very fun to contemplate.  Morgan spends a lot of time on these issues, and on topics like censorship and the pitfalls of translation.

I was tickled by one little incident Morgan describes, in which she called a translation 'deft' and was taken to task by someone who pointed out that it wasn't actually possible for her to really judge the translation:


I had to hold my hands up here: 'rendered through Derbyshire's deft translation' was an asinine thing to write and I wasn't sure what I'd meant by it.  I had fallen into the trap of unthinking, lazy reviewing where a desire to indicate an awareness of the text having been translated made me reach for something trite and meaningless in the absence of anything better to say...

I loved it because I really dislike reviews that say pretentious things like 'deft translation' but I could also understand how she came to write such a thing.

Sometimes I found her questions or thoughts to be a little over-finicky, but on the whole it was a very interesting read.  She was mostly talking about things I'm very interested in too.  And while she did not give a book-by-book account of her year, she did talk about various titles and provide the full list in an appendix.  Quite a few are friends of mine, too; I recognized Too Loud a Solitude, An African in Greenland, So Long a Letter, and others, as well titles and authors that are either sitting on my mental TBR shelf or on my actual one.  I also added lots of books to my wishlist!

I do have one question: Morgan says that "I entered into an involved Twitter correspondence with, of all things, the Panama Canal, whose favorite writer..."  What?  Never does she say that there's a person running the Twitter account.  Just the Panama Canal, which has taste in literature.

NB: Morgan also has an odd little habit of calling books echt, genuine or authentic, when they meet her criteria for being from another place (as opposed to, say, a book by a British writer that is set in Burundi.  It's probably a good book, but it's not what she's looking for).  I'm not sure how I feel about it.  Does she use echt because she doesn't want to say 'authentic'?  In that case, putting it into German isn't really helping.

If anyone wants to help me reach an audience of thousands, get kind offers of books from around the world, or get a lucrative book deal, just let me know. ;)  Meanwhile, you can visit Ann Morgan at her blog and see what books she read.
books literary criticism travel