Spin Title: Prufrock and Other Observations

For the Classics Club Spin, I drew a single poem: "The Love Song of J. Alfred Prufrock," by T. S. Eliot.  This poem was written around 1910 when Eliot was only about 22, and it's all about alienation and massive feelings of inadequacy around women.  Prufrock wants to find love (the carnal sort), but he can't even decide to talk to the women he meets.  He misses every opportunity and just ends up sad and frustrated, thinking about his own inertia and about getting old.  He says, "I have measured out my life in coffee spoons," tiny little smidgens of experience, and he'll probably never dare to do anything as exciting and sensual as eating a peach.  He also prefaces the poem with a quotation from Dante's Inferno, intimating that he's speaking from his own personal hell.

It's a poem that feels squalid.  There's a lot of physical detail, but most of it is...kind of like a dirty London fog.  There's a feeling of going downward into decay, rather than up into anything happy.  Prufrock starts right off with:


Let us go then, you and I,
When the evening is spread out against the sky
Like a patient etherized upon a table;


The first two lines are sing-songy and sound like they're going to lead into a romantic, downright soppy sort of poem, but then he whaps you right between the eyes with an unconscious surgery patient, probably pale and clammy with blood trickling and doctors in surgical masks.  Life is unpleasant and squalid, but also sterile and numb. 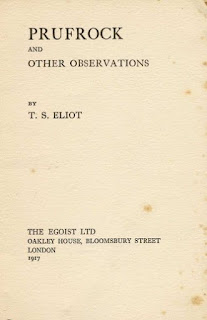 I also read the rest of the poems in this book; there are about 12 of them and they're all quite a bit shorter, all very modern and full of jarring images.

Critics apparently didn't think much of Eliot's poetry at first, but then he was part of a new group of writers who were doing stream-of-consciousness and all sorts of outlandish things.  Before long, Prufrock had established Eliot's career as one of the vanguard, and became a landmark of modernist poetry.

Now I just need to tackle the Four Quartets...